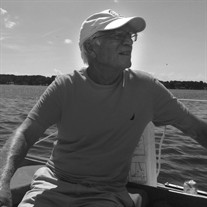 Neil Doherty Armstrong passed away on Saturday, March 23, 2019 at home with his wife by his side. He was 75. He was born on December 21, 1943 in Detroit, Michigan, the son of the late Donald Armstrong and Mona Doherty Armstrong. He grew up in Detroit and attended Cooley High School. In May of 1965, Neil graduated from the University of Michigan and two days later joined IBM in the Dearborn, Michigan branch office. While at IBM, he served as a Systems Engineer working for a decade at Ford Motor Company Headquarters. He then joined IBM’s District Systems Design and Implementation Team in Southfield, Michigan. Following that, he accepted a position at the IBM Gaithersburg Systems Center as a technical consultant to worldwide customers. He worked there as an expert in computer networking systems, travelling extensively as a consultant until his retirement in 2001. A combined total of 36 years with IBM. Once retired, his true work began -- caring for his family and his community. His horse-loving granddaughter and his special needs grandson both benefited greatly from his tireless willingness to play. He became a part of the “Thursday Crew” for Habitat for Humanity Choptank and participated in the construction or renovation of 25 homes in Talbot County. He made three trips to coastal Mississippi to do relief work following Hurricane Katrina and participated in four disaster relief efforts as part of the American Red Cross. His most recent trip was to Santa Rosa, California during the 2017 wildfires. Closer to home, he was an avid supporter of the St. Michaels Food Pantry. He served on the board and was involved in all aspects of its functioning. He also volunteered on various charitable projects for his church - Christ Episcopal Church in St. Michaels, MD. In addition to his devotion to his family and friends, his commitment to his community, and his helping those in need, he truly loved sailing, running and tennis. Cardio tennis at the YMCA of the Chesapeake invigorated him and brought him great joy. He is survived by Susan Armstrong, his wife of 49 years, his daughter, Molly MacKenzie Armstrong (Joey Foster); his grandchildren, MacKenzie Anne Collins and Chase Frederick Collins; his sister, Joyce Armstrong Smith, and his nieces and nephews, Kevin Hykes (Kristi), Lindsay Polyak (Dave), Cameron Hykes (Beth), Andrew Hykes (Amy), Bryan Hykes (Trenda), Lisa Bottger (Ernesto), Trevor Hykes (Jess), and Katie Mahar (Drew). He was preceded in death by his parents, and his dear daughter, Anne Mandeville Armstrong. A memorial service will be held on Saturday, March 30, 2019 at 12:00 pm at Christ Episcopal Church, in St. Michaels, MD with the Reverend Steve Mosher officiating. Following the service, reception will be held in the parish hall. Contributions can be made to The St. Michaels Food Pantry, the YMCA of the Chesapeake or to Habitat for Humanity Choptank.

Neil Doherty Armstrong passed away on Saturday, March 23, 2019 at home with his wife by his side. He was 75. He was born on December 21, 1943 in Detroit, Michigan, the son of the late Donald Armstrong and Mona Doherty Armstrong. He grew up... View Obituary & Service Information

The family of Neil Doherty Armstrong created this Life Tributes page to make it easy to share your memories.