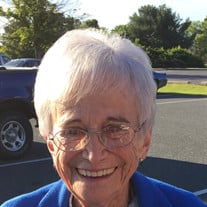 Pansy C. Wilson of Federalsburg passed away at her home on Monday, June 19, 2017 surrounded by her loving family. She was 87. She was born on September 12, 1929 in Pittsville, Maryland, the daughter of the late Guy Leon Carey and Viola Cordrey Carey. She graduated from Pittsville High School in 1946 and Peninsula General Hospital School of Nursing in 1949. She graduated at the top of her class in both schools. Pansy married Howard G. Wilson, Sr. in December 1949 and they were happily married life partners until Howard's death in January 1989. Pansy was employed immediately after her nursing graduation as a head nurse on her floor and after a few short years she became supervisor of nursing. After her hospital service, Pansy went to work for the Health Department first in North Carolina where she and Howard lived for three years. Then returning to Maryland she worked for the Caroline County Health Department for many years as a public nurse and school nurse and helped run various clinics. She stayed employed so long that they gave her 2 retirement parties with her retiring at the age of 80. Pansy's time as a school nurse made her a popular figure around Federalsburg and Caroline County. Many former students have expressed their love for her and support in time of stress and need. She was always active in her family's life and very active in scouting service where she had been a den mother and served other scouting functions. One of her proudest accomplishments was to have all three of her sons be Eagle Scouts. This was a group undertaking between Howard and Pansy. They received the Scout Family of the Year Award for their service to Scouting from the Delmarva Council. Pansy was very active in her church, Union United Methodist Church in Federalsburg where she served on many boards and was best known for being the star salesman for sub sales and other fundraising food sales at church. She attended Sunday School and enjoying going to Bible Study. Pansy loved being part of the Golden Girls, the Silver Girls, and the Blessings Widow Group where she enjoyed being with her dear friends. Some of Pansy's other accomplishments included Relay For Life where she served as chairman for many years, the American Cancer Society with Daffodil Days Fundraisers and for the March of Dimes as a Walker and Supporter. She also was part of AARP for Caroline County where she helped coordinate many activities and enjoyed many AARP sponsored bus trips. In 1998, Pansy was named Caroline County’s Most Beautiful Person in which her nomination letter mentioned she was, “A lady who has touched the hearts of citizens at both ends of the county” and to us the world, because of her presence. Pansy also worked for Preston Automotive Group where she served as Health Ambassador to the employees in which she helped them with their medical related needs and became an additional mother figure to all and being an advocate for the well being of all employees. She truly was Preston Automotive Group’s biggest fan and role model for their Core Values. She will be always be cherished by her family, including her three sons, Howard G. Wilson, Jr. and his companion Linn Hickman of Delmar, MD, Earl Wilson and his wife Kathleen of Federalsburg, Dave Wilson and his wife Peggy of Preston, 13 grandchildren, Amy Wilson, Howard G. Wilson, III, Angie Wilson McCracken, David Wilson, Jr., Earl Wilson, Jr. , Meredith Wilson, Brittany Wilson Holland, Leah Wilson Cole, Todd Wilson, Marina Wilson, Daria Wilson, Michael Moutzalias, Allison Pittman, 9 great-grandchildren, and a brother, Leon Carey and his wife Ruth Ann of Pittsville. She was also preceded in death by a brother, Albert Carey. Funeral services will be held at Saints Peter and Paul Catholic Church, 1210 S. Washington Street, in Easton on Friday, June 23, 2017 at 11 a.m. A visitation with the family will be held on Thursday, June 22nd at Union United Methodist Church, 301 North Main Street, in Federalsburg from 2-4 p.m. and 6-8 p.m. and one hour prior the service on Friday at the church in Easton. In lieu of flowers memorial contributions can be made to Union United Methodist Church, 301 North Main Street, Federalsburg, MD 21632. To share memories with the family please visit www.framptom.com.

Pansy C. Wilson of Federalsburg passed away at her home on Monday, June 19, 2017 surrounded by her loving family. She was 87. She was born on September 12, 1929 in Pittsville, Maryland, the daughter of the late Guy Leon Carey and Viola Cordrey... View Obituary & Service Information

The family of Pansy C. Wilson created this Life Tributes page to make it easy to share your memories.

Pansy C. Wilson of Federalsburg passed away at her home on Monday,...