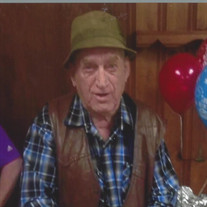 Paul George Jackson Sr. of Rhodesdale, MD, passed away on Tuesday, April 10, 2018 at Nanticoke Memorial Hospital in Seaford, DE. He was 81. He was born on April 8, 1937 in Cambridge, MD, the son of the late Harry Jackson and Marion Irene Simpson Jackson. He was in the first graduating class from North Dorchester High School in 1955. He joined the Air Force in 1955 before working at E.I. DuPont as an electrician for 31 years. He married the love of his life Carol Sue Everage on September 30, 1960. He was a member of the Federalsburg V.F.W. and was a lover of animals, especially birds. He enjoyed his vegetable garden and was always giving vegetables away to everyone. He also enjoyed fishing, crabbing, hunting, and most of all spending time with his friends and family. He is survived by his wife Carol Jackson, his children, Vivian Wheatley, Brenda Jackson (Susanne), and Paul Jackson Jr. (Crissy), his grandchildren, Corey Wheatley (Katie), Megan Wheatley, and Austin Jackson, great-grandchildren, Kaylee, Sean, Kyler, Tyler, Hayden, Wyatt, and Carson, his siblings, Donald Jackson, Jimmy Jackson, Betsy Schwartz, Judy Breazile, Lucy Jackson, Anita Hubbard, and Virginia Lynch, and many nieces and nephews. He was preceded in death by his parents, as well as his brothers, Billy Jackson, and Carl “Bucky” Jackson, sister Shirley Borlaug, and his step-mother, Edith Carmen. A funeral service will be held on Sunday, April 15, 2018 at 2pm at Framptom Funeral Home in Federalsburg, MD with Pastor Terri Bernard officiating. Friends may call on the family on Sunday, April 15, from 12-2pm prior to the start of the service. Interment will be held at Cokesbury Cemetery following the funeral service. In lieu of flowers, the family has requested that everyone make donations to the Federalsburg V.F.W., 2630 Veterans Drive, Federalsburg, MD 21632. Services entrusted to the Framptom Funeral Home, Federalsburg, MD. Share memories with the family at www.framptom.com

Paul George Jackson Sr. of Rhodesdale, MD, passed away on Tuesday, April 10, 2018 at Nanticoke Memorial Hospital in Seaford, DE. He was 81. He was born on April 8, 1937 in Cambridge, MD, the son of the late Harry Jackson and Marion Irene... View Obituary & Service Information

The family of Paul George Jackson created this Life Tributes page to make it easy to share your memories.