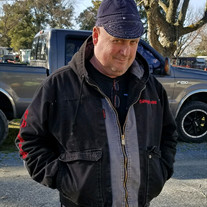 Paul Arthur Keene of Federalsburg passed away on Thursday, April 26, 2018 at his home. He was 60. He was born on June 4, 1957 in Easton, Maryland the son of the late Paul Keene and Betty Frances Mowbray. He graduated from Colonel Richardson High School with the class of 1975. While going to school, Paul started working at Western Auto. On June 6, 2006 he married Valerie D Chance. Over the years, he worked for Tri-State, Dew Line and was the owner of Prime Time Tents and Events. He worked as a Maryland State Inspector for the Preston Automotive Group for over 20 years. Where he will be truly missed by his PAG family and community. Always willing to help anyone, Paul assisted in decorating the ceiling for Prom at Colonel Richardson High School for over forty years. He also enjoyed helping area kids with the Federalsburg Soap Box Derby each year. Paul enjoyed camping with his family and friends at Toms Cove Camp Ground. He loved spending time with his family and grandchildren. He is survived by his wife, Valerie D Keene of Federalsburg, one daughter Jennifer Phillips and her husband Douglas of Easton, one step son, David Chance and his fiancée Alexa Jester of Preston, his mother in law, Shirley Breuil of Eldorado, MD four brothers, Gerald Keene, Ronnie Keene, Stewart Givens and Steve Keene, and one sister, Barbara Street, four grandchildren, Lily, Chase, Bryce and Tiki; his best friends, Bruce Vincent and his children Jordan and Alex; and Dave & Peggy Wilson and their family all of Preston. He was preceded in death by one brother, James “Jimmy” Keene. A celebration of life service will be held on Friday, May 4, 2018 from 6:00 to 8:00 at the Preston Vol. Fire Company on Choptank Road in Preston. Burial will be private. In lieu of flowers, donations may be made to the Johns Hopkins Hospital Kimmel Cancer Center, 401 North Broadway, Baltimore, MD 21287. Services entrusted to the Framptom Funeral Home, Federalsburg. Share memories with the family at www.framptom.com.

Paul Arthur Keene of Federalsburg passed away on Thursday, April 26, 2018 at his home. He was 60. He was born on June 4, 1957 in Easton, Maryland the son of the late Paul Keene and Betty Frances Mowbray. He graduated from Colonel Richardson... View Obituary & Service Information

The family of Paul Arthur Keene created this Life Tributes page to make it easy to share your memories.

Paul Arthur Keene of Federalsburg passed away on Thursday, April...