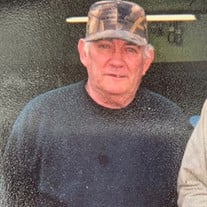 Paul Rodgers Messick of Harrington DE, passed away on Sunday, September 8, 2019 at BayHealth Hospital-Sussex Campus in Milford,DE. He was 75. He was born August 21,1944 in Milford DE, the son of the late David Messick and Myrtle LeGates Messick He was married on February 11,1963 to the former Vivian Sherman Messick. She preceded him in death on August 10,2001. Paul spent his entire life as an auto mechanic. His early career was with Marvin Smith and later for Pat Fry. He eventually started working for himself. An avid outdoorsman, Paul loved camping, rabbit hunting and salt water fishing. In his younger years he enjoyed playing cards with friends and ice cold beer. Paul had great love for his family and grandchildren. He is survived by four children: Sherri Larimore and her husband Randy of Harrington, Paul E Messick of Harrington, Glenn W Messick and his companion Kelly Hull of Felton, and Joanie Messick-Rauda and her husband Carlos of Felton; six grandchildren; Lisa Melenka and her husband Nick of Germany, Jason Larimore of Harrington, Auburn Young and her husband Josh of Harrington, Leslie DeMasters and her husband Daniel of Alabama, Neal Messick and Madison Messick both of Felton, two great-grandchildren, Taylor Young of Harrington and Hannah DeMasters of Alabama, one sister Jo Ann Benson and her husband Davis of Milford, and one brother , Richard “Toby” Messick and his wife Lisa of Felton. In addition to his parents, he was preceded in death by five siblings , Jimmy Messick, Robert Messick, David Messick,Jr, Mattie Messick Bowman, Sara Mea Wilson, and one grandchild Eric Messick. The family will receive friends on Thursday, September 12, 2019 from 11:00 to 1:00 at the Framptom Funeral Home-Fleischauer Chapel in Greenwood. Burial will follow after visitation at St. Johnstown Cemetery in Greenwood a wake will follow at the Harrington Firehouse. Share memories with the family at www.framptom.com

Paul Rodgers Messick of Harrington DE, passed away on Sunday, September 8, 2019 at BayHealth Hospital-Sussex Campus in Milford,DE. He was 75. He was born August 21,1944 in Milford DE, the son of the late David Messick and Myrtle LeGates Messick He... View Obituary & Service Information

The family of Paul Rodgers Messick created this Life Tributes page to make it easy to share your memories.

Paul Rodgers Messick of Harrington DE, passed away on Sunday,...