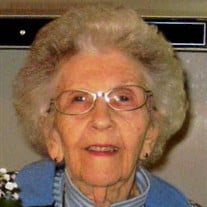 Pearl L. DeFord of Greenwood, DE passed away on Tuesday, January 11, 2022 at Homestead Manor Assisted Living in Denton, MD. She was 94. She was born on March 21, 1927 in Greenwood, DE, the daughter of the late Herman D. Smith and Mary Matilda Rebecca Jenkins. She graduated from Greenwood High School and later retired from L.D. Caulks in Milford in 1990. She was married to Earle Joseph DeFord. He preceded her in death on February 12, 2009 after 62 years of marriage. In her free time, Pearl loved singing and listening to Christian music. She enjoyed the old time country gospel and was a member of Calvary Baptist Church in Denton. She loved flowers, shopping, spending time with her sisters, family and grandchildren. She is survived by three children: Carol Butler and her husband Jack of Denton, Frank DeFord and Barbara Williams and her husband Jim all of Greenwood, six grandchildren: Tammy, Rebecca, Benjamin, Kim and Frank, Jr. and Amy; two step grand-sons: Jim and Chris Williams; four siblings: Hannah Cohee of Harrington, Alberta Roberts of Milford, Frances "Dee" Carmean of Milford, and Joyce Trader of Milford; three sisters-in-law: Ruth Ann DeFord, Thelma Passaro and Eloise Wooden; and a host of great-grandchildren, great-great-grandchildren, nieces, nephews, cousins and friends. In addition to her parents, she was preceded in death by four siblings: Leon Smith, Elizabeth Johnson, Dorothy Harris and Herman Smith, Jr. Funeral services will be held on Monday, January 17, 2022 at 12:00 Noon at the Framptom Funeral Home - Fleischauer Chapel in Greenwood with the Pastor Don Reynolds Officiating. Burial will follow at Saint Johnstown Cemetery in Greenwood. The family will receive friends from 11:00 to 12:00 prior to the start of the service. Expressions of sympathy may be made to the Calvary Baptist Church, 1120 Market Street, Denton, MD 21629. Share memories with the family at www.framptom.com

Pearl L. DeFord of Greenwood, DE passed away on Tuesday, January 11, 2022 at Homestead Manor Assisted Living in Denton, MD. She was 94. She was born on March 21, 1927 in Greenwood, DE, the daughter of the late Herman D. Smith and Mary Matilda... View Obituary & Service Information

The family of Pearl L DeFord created this Life Tributes page to make it easy to share your memories.