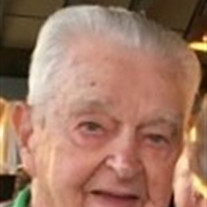 Ralph H. Moore, age 96, passed away on Thursday, March 12, 2020 at Manor House in Seaford, DE. He was born in Bridgeville, DE, the son of the late Henry C. Moore and Dollie Gordy Moore on September 9, 1923. After attending Greenwood High School, he enlisted in the United States Army and fought in Central Europe including serving under George Patton in The Battle of the Bulge as a Sgt. in Company I 346th Infantry Regiment. Ralph loved his country and was proud to serve it. After the war he was employed by Firestone Tire and Rubber and became a store manager of the Milford and later the Dover stores. He helped to establish the first VFW post in Greenwood and served as the first post commander. Ralph was also a member of the Greenwood United Methodist Church serving and chairing different board positions including home missions. He later attended St. Johnstown Church in Greenwood as well. He was a life member of the Greenwood Volunteer Fire Company and served for many years as a fire police and loved their famous Bar-b-que chicken. Ralph loved people and never met a stranger and was loved and respected by those who knew him. In addition to his parents Ralph was preceded in death by his beloved wife of almost 70 years, Betty M. Moore. He is survived by his daughter, Katherine M. Boyd and her husband Robert of Seaford, DE, sisters-in-law, Elaine O'Bier and Jean O'Bier of Greenwood, nieces and nephews, and his dear companion, Ann Blake of Laurel. A funeral service will be held Thursday, March 19, 2020 at 1:00 p.m. at the Greenwood Fire Company. The family will receive friends from 11:00-1:00 prior to the service. Burial will follow at St. Johnstown Cemetery. The family suggests donations in Ralph's memory be made to the Greenwood Fire Company, PO Box 1, Greenwood, DE 19950, Greenwood United Methodist Church, 101 W Market St., Greenwood, DE 19950 or the Greenwood VFW, 301 Mill St., Greenwood, DE 19950. Services entrusted to the Framptom Funeral Home - Fleischauer Chapel in Greenwood. To share memories with the family please visit www.framptom.com

Ralph H. Moore, age 96, passed away on Thursday, March 12, 2020 at Manor House in Seaford, DE. He was born in Bridgeville, DE, the son of the late Henry C. Moore and Dollie Gordy Moore on September 9, 1923. After attending Greenwood High... View Obituary & Service Information

The family of Ralph H. Moore created this Life Tributes page to make it easy to share your memories.