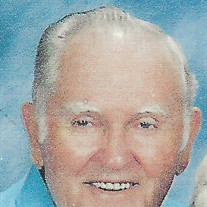 Ralph Kenneth "Kenny" Robbins, 90, of Federalsburg passed away at Talbot Hospice on Wednesday, March 23, 2022 after a brief illness. He was born in Cambridge, MD on August 26, 1931 to the late Herman Robbins and Gethel Pritchett Robbins. As a boy he attended schools in Cambridge. He would work on the family farm for his father during summers and after school. On October 8, 1951 he married the former Margaret Jane Bailey from Federalsburg just before being shipped out with the U.S. Army for the Korean War. He was an Army Corporal and stationed in Germany. He was honorably discharged in 1953. He then began a career of being a truck driver. He drove for Masten Trucking, Red Star Trucking and Estes, retiring in 1986 a the age of 55. He loved growing a garden full of strawberries and vegetables. He liked to travel and go places with is small group of close friends who have all passed now. He also loved wood working and up until his eyesight failed, he could always be found in his workshop. Kenny and Margaret would attend craft shows every weekend selling their crafts, not so much for the money as for the fellowship of other crafters and the joy of talking with people. Kenny was a member of the B.P.O. Elks #1272, American Legion Post #91 , VFW #7460, the Teamsters Union and Wesley United Methodist Church. Besides his wife Margaret, he is survived by his sons Mark Kenneth Robbins (Terry) of Rhodesdale, MD and Dennis Jay Robbins (fiancee' Wendy) of Pleasant View, TN. He is also survived by his grandchildren Deborah Lynn Robbins and Mark K. Robbins of Tennessee, a sister-in-law, Joyce Robbins, numerous nieces, nephews, cousins and two special caregivers, Rosie Bell and April Hardesty He was predeceased by two infant sons Michael and Gordon, five brothers Hildon M. Robbins, Herman "Shorty" Robbins, Paul R. Robbins, Dorsey J. Robbins and John O. Robbins and two sisters Hazel R. Marshall and Margaret Robbins. A visitation will be held on Tuesday, March 29, 2022 at the Framptom Funeral Home, Federalsburg, MD where friends may call between the hours of 6:00 and 8:00 p.m. A graveside service will be held at 2:00 p.m. on Wednesday, March 30, 2022 at the Eastern Shore Veterans Cemetery, Hurlock, MD with Rev. Denzil Cheek officiating. The family requests that memorial donations be made to the Wesley United Methodist Church, c/o Lois Ann Pinder, 30399 Fire Tower Rd., Laurel, DE 19956 or the Talbot Hospice House, 586 Cynwood Dr., Easton, MD 21601. To share memories with the family, please visit www.framptom.com

Ralph Kenneth "Kenny" Robbins, 90, of Federalsburg passed away at Talbot Hospice on Wednesday, March 23, 2022 after a brief illness. He was born in Cambridge, MD on August 26, 1931 to the late Herman Robbins and Gethel Pritchett Robbins. As... View Obituary & Service Information

The family of Ralph Kenneth Robbins created this Life Tributes page to make it easy to share your memories.