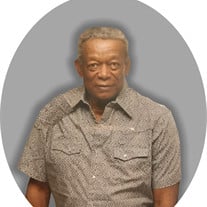 Raymond Le Friend of Preston known fondly to family and friends as "Bo Boy" passed away peacefully at his home on Monday, April 16, 2018 surrounded by loved ones. Raymond was born on March 3, 1935 to LeRoy and Clara Murray Friend. He was the only son of four children. He attended Jonestown Elementary School and Lockerman High School. Raymond retired from Pillsbury of Federalsburg, Maryland in September 2017 after working there for 21 years. Prior to working at Pillsbury, he worked for JoAnne and the late William "Billy" Greenage, Sr. in the early 70's until 1985. He then did farm work for Jimmy Harding for 5 years. Raymond returned to the Greenage farm to assist Billy Greenage, Jr. for 10 years until 2015, when he took over his father's farming business. Raymond worked endlessly without any complaints. Billy stated he worked nights and weekends when the rest of the guys weren't working. He was a well-respected man for his hard work and dedication to his family. Raymond was one of the originals who helped found the Thunderguards Preston Chapter where he dedicated 45 years of service. He was fondly known as "Punch" among the Thunderguards. He loved to ride his Harley Davidson during his early years. Bo Boy was an avid hunter and loved to farm. Raymond was a hard worker and a humble man who lived for family. He is survived by his wife of 63 years, Mable E. Friend, his sister, Barbara Weeks of Federalsburg, his children, Cynthia Briggs, of Seaford, Ann Butler (Jeffrey, Sr.) of Federalsburg, Connie Roach, Robert Friend (Lita), Shannon Friend (Jeanette), Yvonne Brummell (Derick, Sr.) all of Preston, Gloria Greene (Antonio) of Hurlock, Charles Greene of Sacramento, CA, 17 grandchildren, Cawaina (Brian, Sr.), Roger (Jackie), Samantha (Randy), Reginald (Rena), Nicole (Eric), Terrell, TaVon (Jaleesa), Shannon, Lemar, Rosheca, Maurice, Orlando, Derick,Jr. (Katie), Sha'Ronda, Thomas V, Dyneisha and Jeffrey, Jr., 24 great-grandchildren, special cousins and friends, Mnason Townsend, Wilbert Murray, William "Bill" Boyce, Larry Sharp, Charles Griffin, Barry Haynes, and Wendell Wilmer, a host of nieces and nephews, and two adopted sons, Jerry Whittaker and Leon "Teddy" Smith. Besides his parents, he was preceded in death by two sisters, Frances Friend and Betty Jackson. Funeral services for him will be held on Saturday, April 21, 2018 at 12 noon at Union United Methodist Church in Federalsburg with Minister Curtis Davis serving as Eulogist. A visitation will be held on Saturday at the church form 10 a.m. - 12 noon. Interment will follow at Coppins Cemetery in Jonestown. Services entrusted to Framptom Funeral Home. www.framptom.com

Raymond Le Friend of Preston known fondly to family and friends as "Bo Boy" passed away peacefully at his home on Monday, April 16, 2018 surrounded by loved ones. Raymond was born on March 3, 1935 to LeRoy and Clara Murray Friend. He was the... View Obituary & Service Information

The family of Raymond Le Friend created this Life Tributes page to make it easy to share your memories.