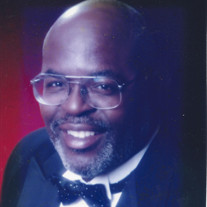 Reginald Barnette Freeman (affectionately known as “Reggie” by all), the son of Alice Freeman-Blake and the late Freddie Camper, was born on October 10, 1954. He departed this life for Gloryland on Saturday, August 17, 2019 at the University Shore Medical Center at Easton. Reggie was educated in the Caroline County Public School System, where he graduated from Colonel Richardson High School in Federalsburg, Maryland. Shortly after his graduation, Reggie relocated to San Diego, California, where he was employed by General Dynamic Steel Corporation for many years. There he built and repaired naval ships and became a skilled welder. He returned home in 1990 and was joined in holy matrimony to Elaine Beulah. He was a devoted husband and family man. Not long after this, Reggie was stricken with a serious illness which the Lord delivered him through. Reggie accepted the Lord into his life and became a devoted Christian. He was a very giving person and blessed many people especially the elderly with free vegetables from his produce business, most of which he grew in his garden. Reggie loved the Lord and strived to live his life in a manner which demonstrated his dedication to the Lord. He was a praiser and loved to tell of God’s goodness and talk about the word of God. He was a member of Farmer’s Memorial Church of God in Christ in Preston, Maryland and served faithfully as a Deacon. Reggie leaves to morn his passing his devoted wife Margaret Elaine Beulah Freeman of Federalsburg, MD; sons, Reginald Thomas, Easton, MD, Derrick Freeman, San Diego, CA; daughter Ashley Freeman, San Diego, CA; grandchildren, Monique, Olivia, Ella, & Ava, Easton, MD and Jacob Freeman, San Diego, CA; a great-grandchild, Melea; mother, Alice Blake, Jonesboro, GA; siblings, Peggy Freeman-Davis (Joe), Camden, DE, Vincent Freeman (Angie), Easton, MD, Janice Blake, Jonesboro, GA, Darrell Blake, Dover, DE, Kevin Blake (Freda), Cambridge, MD, Tyrone Camper, Dwayne Camper, and Glenda Camper, Easton, MD; and a host of relatives, brothers and sisters in Christ and friends. In addition to his parents, Reggie is preceded in death by his step-father, Frederick Blake and a brother, Keith Blake.

Reginald Barnette Freeman (affectionately known as &#8220;Reggie&#8221; by all), the son of Alice Freeman-Blake and the late Freddie Camper, was born on October 10, 1954. He departed this life for Gloryland on Saturday, August 17, 2019 at the... View Obituary & Service Information

The family of Reginald B Freeman created this Life Tributes page to make it easy to share your memories.