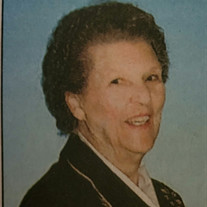 Rhoda B. Startt of Preston passed away on Sunday, March 27, 2022, at the University of Maryland Medical System at Easton. She was 95. Born on January 26, 1927, in Bishops Head, Dorchester County, Maryland, she was the daughter of the late James W. Bramble and Mossye Morris Bramble. She was married to Frederick E. Startt on December 18, 1951. She worked many jobs throughout her lifetime including being a waitress at The Crown Inn, she was a tomato canner at the cannery on Williamsburg Church Rd as well, but the job that was probably her most favorite was when she was a caretaker for a property in Oxford, Md working alongside her beloved husband Fred. Living in Preston, she served as the first female town commissioner, later served as the Police Commissioner and finally was the Town Mayor. She also served as a Girl Scout Troop Leader, The Preston Vol. Fire Company Ladies Auxiliary for many years. In her free time, you could find her fishing and crabbing. She was an avid Baltimore Orioles fan. She loved spending time with her family, grandchildren and her 2 black labs, Katie and Sadie. She is survived by her husband, Frederick E. Startt of Preston; two children: Wayne Startt and his wife Patti of Federalsburg, and Donna Argo of East Prairie, MO; four grandchildren: Johnny Roach and Brad Heckler of East Prairie, MO, Wayne Startt, Jr. and his wife Carly of Federalsburg and Amanda Startt of Greensboro; two great grandchildren: Landon Somerville and Grace Startt; and one brother: Melvin Bramble and his wife Sandra of Cambridge. Services will be private and at the convenience of the family.

Rhoda B. Startt of Preston passed away on Sunday, March 27, 2022, at the University of Maryland Medical System at Easton. She was 95. Born on January 26, 1927, in Bishops Head, Dorchester County, Maryland, she was the daughter of the late... View Obituary & Service Information

The family of Rhoda B. Startt created this Life Tributes page to make it easy to share your memories.