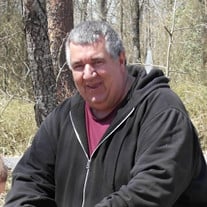 Richard “Steve” Adams of Greenwood passed away on Monday, March 30, 2020 at home surrounded by family. He was 64. He was born on September 10, 1955 in Milford, DE, the son of the late George W.N. Adams and Gladys Kalinevitch Adams of Greenwood. Steve was employed by the United States Postal Service, Salisbury, MD where he was a mail processing equipment mechanic. He served as president of the American Postal Workers Union, Salisbury local 4321 for over 20 years. He worked tirelessly to protect workers rights. Under his leadership the closure of the Easton Mail Processing Plant was prevented. Steve had a heart for children and a love of baseball. He coached, umpired and served as President of the Woodbridge Little League for many years. He also spent much of his free time looking after the ball fields, mowing and preparing for practices and games as well as showing up for most of his nieces and nephews games. Many area children remember him as the man who gave full size candy bars at Halloween. He also loved driving his old Expedition on the beach, and spending time with his family. He is survived by his mother, Gladys Adams of Greenwood, four siblings: Lee Adams of Dover, Jackie Lyons of Las Vegas, NV, Nick Adams and his wife Debi of Greenwood, and Barbara Adams of Magnolia; six nieces and nephews: Crystal Brock and her husband Keith and Stephanie Adams and her husband Chris all of Greenwood, Derek Adams and his wife Katie of Millsboro, Steven Lee Adams and Carrie Adams both of Dover, and Mike D’Armi and his wife Hope of NY; ten great nieces and nephews: Tyler Evans, Libby Adams, Peyton Adams, Brady Adams, James Adams, Maxx Pusey, Dylan Brock, Parks Pusey, Asher Adams and Ophelia Seery. In addition to his father, Steve was preceded in death by a sister, Shirley Adams. Due to the limitations set forth by our government, services will be private. Interment will be in St. Johnstown Cemetery in Greenwood. In lieu of flowers donations may be made to the Woodbridge Little League, Post Office Box 29, Bridgeville, DE 19933 or to the Allen Cancer Center at Nanticoke, 701 Middleford Road, Seaford, DE 19973.

The family of Richard Steven Adams created this Life Tributes page to make it easy to share your memories.

Richard “Steve” Adams of Greenwood passed away on Monday, March...