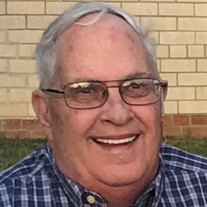 Richard Lee Schmick, Sr. of East New Market passed away peacefully on Wednesday, February 16, 2022 at Signature HealthCARE at Mallard Bay in Cambridge. He was 73 years old. Born in Easton on May 2, 1948, to the late Robert Lee Schmick and Geneva Todd Schmick. Richard went on to graduate from Cambridge High School in 1966. He was employed with several newspapers including the Capital Gazette and Seaford Leader before beginning a second career in real estate, where he was affiliated with several agencies over the years: Anchor Realty, Century 21, ERA Realty and the Hogans Agency. He ultimately retired from Tri-Gas & Oil of Federalsburg. Baptized at Immanuel Lutheran Church in Preston, Maryland, he served his faith community in different capacities, serving on the Church Council, Member of the Senior Choir, Director of the Junior Choir, and Sunday School Superintendent. He was also a past member of the Lions Club, International. Richard married Cheryl Ann Savington on July 26, 1969. They were married 52 years. Richard was preceded in death by a son, Robert Alton Schmick, his parents, Robert and Geneva Todd Schmick, his sister, Linda Schmick Chambers, and a beloved Aunt and Uncle, Vivian Mace "Smitty" Smith and Hilda Schmick Smith. Richard is survived by his wife Cheryl, his daughter Lynn (William) Thomas of Easton, and his son Richard Lee Schmick Savington of Easton. He is survived by five grandchildren; Allison Marie Thomas (Jason) Shelton of Lynchburg, Virginia, Robert Ezekiel Savington of Centreville, MD, Nicholas Ryan Savington of New York, New York, Andrew Liam Thomas of Easton, Maryland and Emily Jane Dickinson of Easton. He is also survived by one great-grandchild: Brookelynn Nicole Savington of Centreville, Maryland. He is also survived by a sister, Doris Schmick Maser of Federalsburg, Maryland and numerous nieces and nephews. Services will be private and at the convenience of the family. To share memories with the family please visit www.framptom.com

Richard Lee Schmick, Sr. of East New Market passed away peacefully on Wednesday, February 16, 2022 at Signature HealthCARE at Mallard Bay in Cambridge. He was 73 years old. Born in Easton on May 2, 1948, to the late Robert Lee Schmick and... View Obituary & Service Information

The family of Richard Lee Schmick, Sr. created this Life Tributes page to make it easy to share your memories.