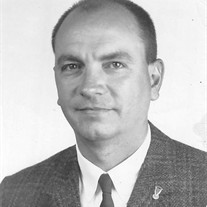 Richard “Dick” Tomlinson of McDaniel, died on Monday May, 11, 2020 at Candlelight Cove in, Easton, MD. He was 89. Born on March 14, 1931 in Altoona, PA, he was the husband of Ann Tomlinson, of McDaniel. Dick grew up in Moundsville, Clarksville, WV, and Johnstown, PA. He moved to Baltimore County MD. when he was in the 4th grade, and graduated from Catonsville High School in 1948. He married his high school sweetheart Ann that same year. Dick joined his father-in-law in the family concrete products business, manufacturing burial vaults and septic tanks. Dick was instrumental in designing and building improved handling and delivery systems for the business which enhanced their productivity. Dick also built two homes, almost single-handedly, one in Randallstown, and the other, a log home which they retired to in McDaniel. Dick was President of the Randallstown Jaycees and oversaw the approval by Blue Cross/ Blue Shield, of a rehabilitation center for the local hospital there. As a result of that effort, Dick and several other Jaycees were nominated for the Outstanding Young Man award that year, which ultimately was won by Paul Sarbanes. Upon Dick’s mandatory retirement from Jaycees, at age 36, he was made a JCI Senator. Dick was an avid golfer, and a member of Harbortown Golf Club and later the Easton Club. He enjoyed boating, and loved to fish. He was active in the Coast Guard Auxiliary and participated in several grounded boat recoveries during his time served. He was also an ardent supporter of the Liberty Ship John Brown, and was able to cruise on that ship out of Baltimore Harbor. He and Ann became interested in RV travel, owning several travel and fifth wheel trailers. They spent years traveling many miles, including trips cross country one to Alaska by RV. For several years, they wintered in Florida in their RV. In addition to his loving wife of 71 years, Ann Smith Tomlinson, he is survived by 4 children; Rick, Vicki (Tyde), Ken (Polly), and Jeff (and his late wife Johnnie). Dick also has 6 grandchildren; Andrea (Scott), Julie (Richard) Hannah (Joe) Jenna (Joe) Jamie (Chris) and Benjamin (who preceded him in death in 2006). His Great grandchildren include; Jerusha, Serah, Lucas, Judah, Leah, Lauralee, Alyssa and Carter. Due to Covid 19 restrictions, Services will be private. In lieu of flowers memorial donations may be made to; Talbot Hospice Foundation, 586 Cynwood Drive, Easton, MD. 21601; Candle Light Cove, 106 W. Earle Ave. Easton, MD. 21601 or to the Tilghman United Methodist Church P.O. Box 192 Tilghman, MD. 21671. Arrangements are entrusted to the Framptom Funeral Home by the Coales, Ostrowski Chapel, St. Michaels, Md. (visit www.framptom funeral home .com)

The family of Richard Tomlinson created this Life Tributes page to make it easy to share your memories.

Richard “Dick” Tomlinson of McDaniel, died on Monday May, 11,...