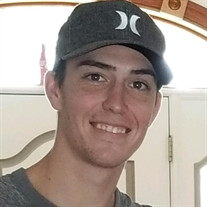 Robbie Aaron Payne of Preston, MD, passed away on Tuesday, June 5, 2018 in Charleston, WV. He was 26. Born on October 1, 1991 in Easton, MD, he was the son of Curt and Amy Miller of Seaford, DE and Curtis and Pam Payne of Preston, MD. Robbie graduated from Seaford High School in 2009 where he participated in the Blue Jays football and baseball programs. Growing up in Caroline County he enjoyed all sports and participated in youth baseball, football, basketball and soccer. He was a member of several district and state championship little league baseball teams including the South Caroline Little League team that finished in the top four among the US teams at the 2004 Little League World Series at Williamsport Pennsylvania. After High School Robbie frequented local gyms and enjoyed pick up basketball. Robbie had a very outgoing personality and made friends where ever he went. He made a lasting impression on those he met and will be most remembered by the smiles he put on the faces of those around him. His daughter Penelope was his Pride and Joy. Penelope coming into his life was Robbie’s happiest moment. We pray he continues to look over her as her guardian angel. In addition to his parents, Robbie is survived by his girlfriend Casey Riggin, and their daughter Penelope Grace Payne, two sisters Amanda Payne and Christina Persico and four brothers Todd Miller, Ross Miller, Jonathan Persico, and Nicholas Persico, grandparents Joan Payne, Susan Hoffman (Mike), and Norman and Florence Hoffman, aunts and uncles Jill and Gary Haley, Angie Thompson and Celeste Sanborn, several cousins and a niece. He was proceeded in death by Grandfather Robert Payne and Cousin Bennett Haley. A visitation will be held on Monday, June 11, 2018 from 6-8pm at the Framptom Funeral Home in Federalsburg, MD. Funeral services will be private. Robbie’s Family invites everyone to join them for a celebration of his life at Federalsburg Fire House on Tuesday, June 12, 2018 starting 1:00pm. In lieu of flowers, the family has requested that memorial contributions be made to either Provident State Bank 142 North Harrison St., Easton, MD 21601 C/O “Robbie Payne Memorial Fund” to be placed in a trust fund for his daughter, Penelope or to South Caroline Little League at PO Box 728, Preston, MD 21655.

Robbie Aaron Payne of Preston, MD, passed away on Tuesday, June 5, 2018 in Charleston, WV. He was 26. Born on October 1, 1991 in Easton, MD, he was the son of Curt and Amy Miller of Seaford, DE and Curtis and Pam Payne of Preston, MD. Robbie... View Obituary & Service Information

The family of Robbie Aaron Payne created this Life Tributes page to make it easy to share your memories.