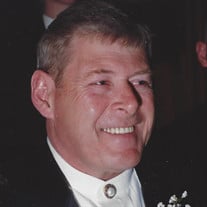 Robert Kenneth Carels, Sr. of Hurlock passed away on Wednesday, June 21, 2017 at UMSMC at Easton. He was 73. He was born on May 15, 1944 in Easton, Maryland, the son of the late George David Carels and Eva Pauline Goswellen. He was also preceded in death by his wife, Lynne Ewing Carels in May 2006. Kenny graduated from the first graduating class at Colonel Richardson High School in 1962. He enlisted in the National Guard in Seaford and gave six years of service to the guard. He had worked previously for Service Trucking, Tri-Gas & Oil, E.I. DuPont, Hershey Ice Cream, and Thrifty Rental Car Company. Kenny worked for 25 years of faithful service for Easton Steel Company. He had attended Harmony United Methodist Church. He loved shooting pool and enjoyed going dancing. Kenny enjoyed coaching all three sons in baseball and never missed a game. His home was always open to anyone at anytime. He was always there for his family and even would do without or make sacrifices in order to better the life of his children. He is survived by three sons, Rob Carels and his wife Jacki of Easton, Randy A. Carels and his wife Kelly of Federalsburg, and Troy Carels and his wife Christie of Hurlock, a daughter, Amy Carels Rigney and her husband Mike of Reliance, ten grandchildren, Camryn E. Carels, Kaleigh E. Meintzer, Taelor L. Jones, Ava M. Carels, Cohen Carels, Sadie Carels, Luke Carels, randon Carels, Bryan Smith and Gracie Rigney, a sister Joyce Annette Smith of Raleigh, NC, a brother, Wayne Carels and his wife Sharon of Bethlehem, nieces, Melissa Kelley and Kathy Blair and a nephew, Mark Carels. A funeral service will be held on Tuesday, June 27, 2017 at 1:00 at Framptom Funeral Home, Federalsburg, MD with a visitation from 11:00 a.m.- 1:00 p.m. prior to the service. Burial will follow at Hill Crest Cemetery, Federalsburg, MD. Memorial contributions can be made in his memory to The American Lung Association, 55 W. Wacker Drive, Suite 1150, Chicago, IL 60601 or Union United Methodist Church, 301 N. Main St., Federalsburg, MD 21632. Share memories with the family at www.framptom.com

Robert Kenneth Carels, Sr. of Hurlock passed away on Wednesday, June 21, 2017 at UMSMC at Easton. He was 73. He was born on May 15, 1944 in Easton, Maryland, the son of the late George David Carels and Eva Pauline Goswellen. He was also preceded... View Obituary & Service Information

The family of Robert Kenneth Carels Sr. created this Life Tributes page to make it easy to share your memories.

Robert Kenneth Carels, Sr. of Hurlock passed away on Wednesday,...