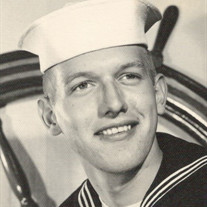 Robert Arnett Fluharty of Preston, Maryland passed away on Wednesday, April 7, 2021 at his home in Preston, Maryland surrounded by his family. He was 82 years of age. He was born on January 3, 1939 in Easton, Maryland to the son of the late Elmer H. Fluharty and Edna Elizabeth Arnett Fluharty. Growing up in Preston, he graduated from Preston High School with the class of 1957. He later enlisted in the United States Coast Guard. He was passionate about his service and enjoyed his tenure serving his country. Following his honorable discharge in 1959 he continued to serve in the Coast Guard Reserve while working in his father's Barber Shop. He married his soulmate, Diane Travers Fluharty, and they made their home in Preston. Following the Barber Shop, he worked as a salesman for Esskay Meat Company as well as Sunshine Laundry. Beyond that, he ultimately retired from Holt Paper and Chemical Company. Robert served his community as the longest living member of the Preston Vol. Fire Company, where he has served in various capacities over the years. He also was one of the members who initiated the breakfast fundraisers to support the cause of the department. He proudly served in the Red Knights Motorcycle Club, a member of the Nanticoke A.F. & A.M. Nanticoke Lodge in Federalsburg, member of the Federalsburg V.F.W. post #5246, Member of the Hurlock American Legion Post #243, and the Eastern Shore Shrine Club. Robert loved spending time with his family more than anything else. He is survived by his wife, Diane Travers Fluharty of Preston, one daughter, Kim Wheatley of Stevensville, Maryland, one son, Jeffrey Fluharty and his wife Holly of Ocean Pines, Maryland, one niece, Teresa Bronson and one granddaughter: Taylor Wheatley. Robert also had two beautiful great-grandchildren River Wheatley and Brandon Jr. In addition to his parents, he was preceded in death by one brother: John Fluharty Sr., his nephew: John Fluharty Jr. and his grandson: Brandon Wheatley. A memorial service will be held on Wednesday, April 14, 2021 at 12 Noon at the Framptom Funeral Home, Federalsburg, MD. The family wll receive friends from 11:00 to 12:00. Entombment at the Eastern Shore Veterans Cemetery will be private. In lieu of flowers, donations can be made to the Preston Volunteer Fire Department, 3680 Choptank Rd., Preston, MD 21655. Share memories with the family at www.framptom.com

Robert Arnett Fluharty of Preston, Maryland passed away on Wednesday, April 7, 2021 at his home in Preston, Maryland surrounded by his family. He was 82 years of age. He was born on January 3, 1939 in Easton, Maryland to the son of the... View Obituary & Service Information

The family of Robert Arnett Fluharty created this Life Tributes page to make it easy to share your memories.

Robert Arnett Fluharty of Preston, Maryland passed away on Wednesday,...