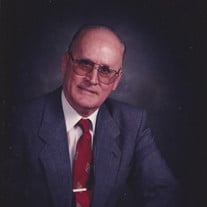 Robert Myers Messick passed away on Tuesday, October 20, 2020 at Bayleigh Chase in Easton, MD. He was 92. He was born on May 29, 1928, the son of the late Perry Rache Messick and Lillian Virginia (Woodward) Messick. He graduated from Hurlock High School in 1945, and he married the love of his life, Irene Virginia Messick on April 27, 1946. For most of his life, he attended First Church of God, where he held many different positions as a Sunday school teacher, served on the evangelistic team, was head usher, and chairman of the board of trustees. In later years, he attended Faith Baptist Church in Cambridge, MD. In his time outside of work at Continental Can, he enjoyed watching Westerns, listening to Gaither music, volunteering at Chesapeake Woods, and camping. He was a pillar of faith for his family and taught his children how a Christian should be. He is survived by his children, Ronald Messick, Sr. (Pam), Linda Slacum (Myers), Larry Messick (Jennifer), and Richard Messick (Amber), his grandchildren, Ronald Messick, Jr., Terry Messick, Jenny Truitt, Donnie Taylor, Cheri Slacum, Robert E. Messick, Clayton Messick, Heather Messick, and Eric Messick, 15 great-grandchildren, 4 great-great-grandchildren, and his siblings, Clara Mae Evans, Shirley Abbott, Anne Slacum and Janet Messick. He was preceded in death by his parents, his wife, Irene Virginia Messick, and his siblings, Donald Messick, Gladys Nepert, Paul Messick, Norris Messick, Kenneth Messick and Nancy Ressler. A funeral service will be held on Friday, October 23, 2020 at 1pm at Framptom Funeral Home in Federalsburg, MD with Pastor Larry Messick officiating. Friends may call on the family from 11am-1pm prior to the start of the service. Interment will be held at Unity Washington Cemetery in Hurlock, MD immediately following the service. Services entrusted to the Framptom Funeral Home. Share memories with the family at www.framptom.com.

Robert Myers Messick passed away on Tuesday, October 20, 2020 at Bayleigh Chase in Easton, MD. He was 92. He was born on May 29, 1928, the son of the late Perry Rache Messick and Lillian Virginia (Woodward) Messick. He graduated from Hurlock... View Obituary & Service Information

The family of Robert Myers Messick created this Life Tributes page to make it easy to share your memories.