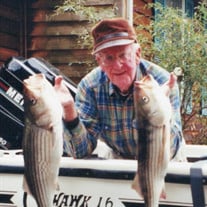 Robert Stewart Ross of Easton died at the U.M.S.M.C. on Tuesday, August 17, 2021. He was 98. Born on June 7, 1923 in Carluke, Scotland he was the son of the late Andrew and Catherine Thorton Ross. He moved to the U.S. with his family when he was 9 years old; they settled in Baltimore. Mr. Ross attended Baltimore city public schools, though he was not eligible to join the U.S. military during WWII he instead joined the Royal Canadian Air Force. He served honorably to protect the boarders of the U.S. and Canada during the war. Following his release from active duty he returned to the U.S and again settled in Baltimore. There he met and married the former Helen Warfield. They raised their children while Mr. Ross worked at various jobs until the early 1960's when he started his own company J.M.I. of Baltimore. He took his work very seriously and maintained the highest level of respect from his clients. In the early 1970's he and his family spent weekends and time off in Centreville, MD. They loved the eastern shore; upon his retirement they moved to St. Michaels, then Easton. His beloved wife Helen died on March 23, 2014. Mr. Ross enjoyed fishing with his son Robert, Jr. you might say they had a competition. Mr. Ross is survived by his children; Diane L. Burnham and her husband Russell Roda of Pasadena, MD. Kathleen V. Ross, and her husband John D. Newton of Baltimore, Robert S. Ross, Jr. of Easton, and Andrea L. Ross also of Easton. In addition he is survived by 10 Grandchildren; Kristine, Jennifer, Krystal, Korrie, Ashleigh, Kirby, Taylor, Amanda, Dustin, and Hunter. Also Numerous Great Grandchildren and 1 great-great grandchild. In addition to his wife he was preceded in death by a son; David, and a grandson; Robbie. Friends may visit the family on Tuesday August 24, 2021 from 1:00 until 3:00 pm at the Framptom Funeral Home-Ostrowski Chapel, 312 S. Talbot Street, St. Michaels. Where a celebration of life will begin at 3:00 pm. Burial will be private at a later date. In lieu of flowers, donations may be made in Mr. Ross's memory to the Chesapeake Bay Foundation Attn: Membership Department 6 Herndon Avenue Annapolis, MD 21403

Robert Stewart Ross of Easton died at the U.M.S.M.C. on Tuesday, August 17, 2021. He was 98. Born on June 7, 1923 in Carluke, Scotland he was the son of the late Andrew and Catherine Thorton Ross. He moved to the U.S. with his family when he... View Obituary & Service Information

The family of Robert S. Ross created this Life Tributes page to make it easy to share your memories.

Robert Stewart Ross of Easton died at the U.M.S.M.C. on Tuesday,...