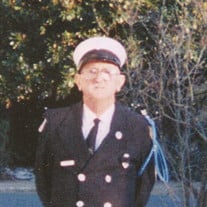 Robert R. Wahl, Sr. of Rhodesdale, MD passed away on Thursday, July 29, 2021 at Coastal Hospice at the Lake in Salisbury, MD. He was born November 19, 1928 in Baltimore, MD. He was the son of the late George J. Wahl and Marie H. Hastings Wahl. After high school he enlisted in the United States Navy and was deployed in the South Pacific. He married Barbara Bowie in 1948 and they had eight children. Mr. Wahl worked at HB Pain Company for approximately 30 years. Mr. Wahl also owned and operated Oak Park Kennels in Baltimore County Maryland with his wife and children and delighted in boarding and showing German Shepherd dogs for several years. In 1972 the family moved to the Federalsburg area. Mr. Wahl and his wife provided care services for people at the Benedictine School. Following his wife's death in 1992 he continued to work at the Benedictine School until the age of 85. Mr. Wahl was a lifetime member of the Preston Volunteer Fire Company where he served as Vice President for five years and as the Chaplain and E.M.T. for 15 years. He enjoyed engaging in pranks, making outdoor chimes / metal work, corn hole games, music always, horse shoes and family gatherings. He also enjoyed visiting everyone at the Benedictine School and participation in PVFD as his health permitted. He is survived by his children; Gail Beckum (William), Shirley Jean Mullin, Paul Wahl (Sherri), Shawn Wahl (Donna), 10 grandchildren, numerous great-grandchildren, and his brother; Edwin Wahl. In addition to his parents he was preceded in death by his wife; Barbara Bowie Wahl, and his children; Barbara Fowler, Robert Wahl, Jr., James Wahl and Mike Wahl. A funeral service will be held at the Framptom Funeral Home in Federalsburg on Wednesday, August 4, 2021 at 12pm with Pastor Marie Coulbourne officiating. Friends may call on the family Tuesday evening August 3 from 6 until 8pm, or from 11-12pm prior to the start of the service on Wednesday. Interment will be held at Junior Order Cemetery immediately following the service. Services entrusted to the Framptom Funeral Home. Share memories with the family at www.framptom.com.

Robert R. Wahl, Sr. of Rhodesdale, MD passed away on Thursday, July 29, 2021 at Coastal Hospice at the Lake in Salisbury, MD. He was born November 19, 1928 in Baltimore, MD. He was the son of the late George J. Wahl and Marie H. Hastings Wahl. After... View Obituary & Service Information

The family of Robert R. Wahl, Sr. created this Life Tributes page to make it easy to share your memories.