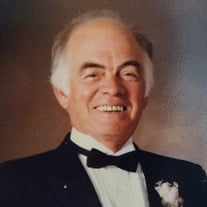 Robert Perry "Sonny" Wroten of Cambridge passed away on Sunday, September 26, 2021 at his home with his family by his side. He was 87. Born on February 8, 1934 in Cambridge, the son of the late Melvin James Wroten and Mazie Kelly Wroten. Sonny graduated from Cambridge High School with the class of 1953. He later earned his Bachelor of Science equivalence certificate from the University of Maryland in 1970. Sonny was married on July 11, 1953 to Faye Hooper Wroten and they initially made their home in Salem, Maryland before moving to Cambridge in 1971. Sonny was a vocational instructor for the Eastern Shore State Hospital Center for most of his working career. He also owned and operated Cheetahs' Pub and Pool Room. This afforded him an opportunity to enjoy and share his many hobbies and billiards. Over the years, Sonny played the great Willie Mosconi, Ed Taylor and Alan Hopkins. Sonny was always known for his athletic ability. He played football, basketball, and baseball in in High School; and a perfectionist in any and all sports which he chose to compete. At one time he was the last Freshman to make the varsity basketball team and although he never started a game he ended the season just six points short of being the team's leading scorer. He was the Junior and Senior table tennis champion. He has twice been the Eastern Shore Archery champion and retired the Dorchester County archery championship trophy after winning the title three times. He loved to hunt with his bow because it was more of a challenge. He owns 75 straight in skeet shooting. He really enjoyed playing golf at the former Cambridge Country Club with his many friends. Sonny was actively playing in the DCSL fast pitch softball league in his forties where he led the league in hitting. He was very proud of the fact that he was the Junior class quarterback who led the Cambridge High School Raiders to their first win over Wi High in 1952 winning 20 - 6. Sonny was a member of numerous social clubs that serve the community including the Benevolent and Protective Order of Elks, American Legion Post #91, and the VFW Post #7460 all in Cambridge. He is survived by his wife of 67 years, Faye Hooper Wroten, two sons: Kelly Wroten and Kirk Wroten all of Cambridge; grandchildren: Michael, Maggie, Max, Jake, one great grandson Beckett; and his sister, Charlene Stagg of Cambridge. In addition to his parents, Sonny was preceded in death by his sister, Melva Ann Brittingham. A celebration of Sonny's life will be held on Thursday, September 30, 2021 at 1:00 at Open Bible Church, 1619 Race Street in Cambridge with Pastor Steve Bloodsworth officiating. The family will receive friends from 12:00 to 1:00. Honorary Pallbearers will be Eric Wheatley, Harvey Davis, John Moody, Dicky Harrington, and Dicky Lowry. Expressions of sympathy may be made to Open Bible Church, 1619 Race Street, Cambridge, MD 21613. Services entrusted to the Framptom Funeral Home & Cremation Center. Share memories with the family at www.framptom.com

Robert Perry "Sonny" Wroten of Cambridge passed away on Sunday, September 26, 2021 at his home with his family by his side. He was 87. Born on February 8, 1934 in Cambridge, the son of the late Melvin James Wroten and Mazie Kelly Wroten. Sonny... View Obituary & Service Information

The family of Sonny Wroten created this Life Tributes page to make it easy to share your memories.

Robert Perry &quot;Sonny&quot; Wroten of Cambridge passed away on Sunday,...