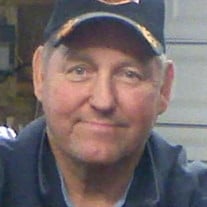 Ronald “Ron” Lee Hughes of Greenwood passed away on Saturday, June 20, 2020 at his home surrounded by his loving family. He was 71. He was born on December 8, 1948 in Lewes, DE, the son of the late Roland Hughes and Grace Beebe Hughes. He served in the United States Army during the Vietnam War. He was married to Eunice Morgan Hughes. She preceded him in death on December 24, 2006. He worked as a truck driver for Burris Foods retiring unexpectedly. In his free time, he loved to fish, hunt, and go camping with his family and friends. He also enjoyed tinkering and rebuilding John Deere tractors and working on cars. He loved spending time with his family and grandchildren. He is survived by a daughter, Cynthia Hughes Goldsborough and her husband Norman, III of Greenwood, two step-sons, David Legates and his wife Rhonda of Harrington and George Legates and his wife Thelma of Houston, many grandchildren, including his caregivers, Allison Hughes and Makayla Goldsborough. He had eight siblings: Elwood, his twin Roland, Mary Ann, George, Rubin, Charlie, Mikey and JoAnne. In addition to his parents, he was preceded in death by three step-sons, Paul Legates, Tony Legates and Donnie Legates, and three siblings David, Pat and Kenny. Funeral services will be held on Wednesday, June 24, 2020 at 12:00 at the Framptom Funeral Home – Fleischauer Chapel in Greenwood. Burial will follow in Hollywood Cemetery in Harrington. The family will receive friends from 11:00 to 12:00. Expressions of sympathy may be made to the Seasons Hospice, 220 Continental Drive, Suite 407, Newark, Delaware, 19713

The family of Ronald Lee Hughes created this Life Tributes page to make it easy to share your memories.

Ronald “Ron” Lee Hughes of Greenwood passed away on Saturday,...