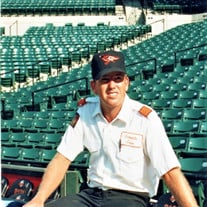 Ronald (Ronnie) Ruben Potter, of Cambridge, Maryland, passed away on Monday, February 1, 2021, at home with his loving family by his side. He was 55. He was born on June 12, 1965 in Cambridge, MD, the son of Ronald Wayne Potter and Sandra Eileen (Rhodes) Potter. He was a graduate of Cambridge South Dorchester High School Class of 1983 and went on to attend University of Maryland College Park where he studied Agronomy. From there he was a groundskeeper at Andrews Air Force Base Golf Course followed by becoming the Assistant Groundskeeper of the Naval Academy Golf Course. He then became Assistant Manager Groundskeeper at the Memorial Park Stadium and then followed over to Camden Yards. He enjoyed his work with the Orioles and working with the grounds crew, “Major Sports Turf Inc.” He started his own business after his years with the Orioles where he built and maintained baseball fields and golf courses. Ronnie befriended many of the baseball players and loved the game. One of his favorite memories is the night that Cal Ripken, Jr. was honored at his 2,131 consecutive game at Camden Yards and Ron drove him around the field in the red corvette in his celebration. He loved to fish, travel, listen to music and attended over 200 concerts, was a very unique artist, and spend time with his family. Ronnie was a friend to all and was someone that you couldn’t help, but gravitate towards.  He is survived by his parents, Wayne and Sandra Potter, his brothers, Rick Potter (Nancy) and Chuck Potter (Michele), and his nephew Nicholas Potter (MacKenzie), Brandie Johnson (Justin) and Bryan Towers, and great-nieces and nephews, Madison, Addie, Paxton, and Dominick, and many other cousins and family members. He was preceded in death by grandparents, Babe and Emogene Potter of Cambridge, MD, and Wendell and Mabel Rhodes of Salisbury, MD, and two uncles, Tom Potter and Tom Rhodes. A visitation will be held at Framptom Funeral Home in Federalsburg, MD on Friday, February 12, 2021 from 11am-12pm. Services will be private. Memorial contributions may be made in Ronnie’s memory to The Johns Hopkins Center for Brain and Lung Cancer Research, Fund for Johns Hopkins Medicine, P.O. Box 17029, Baltimore, MD, 21297-1029 or to Coastal Hospice, PO Box 1733, Salisbury, MD 21802. Services entrusted to the Framptom Funeral Home. Share memories with the family at www.framptom.com.

Ronald (Ronnie) Ruben Potter, of Cambridge, Maryland, passed away on Monday, February 1, 2021, at home with his loving family by his side. He was 55. He was born on June 12, 1965 in Cambridge, MD, the son of Ronald Wayne Potter and Sandra Eileen... View Obituary & Service Information

The family of Ronald Ruben Potter created this Life Tributes page to make it easy to share your memories.