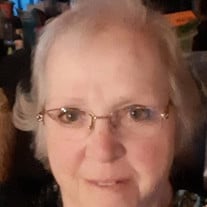 Easton, Rose A. Miles of Easton died at the Washington Adventist rehab Center in Tacoma Park, MD. On Tuesday, September 21, 2021. She was 75. Born in Latrobe, PA. on July 10, 1946 she was the daughter of the late Harry E. and Rose Moffa Swartz. At an early age her Family moved to Easton, where Rose grew up and attended Sts. Peter & Paul School., in Easton. On September 11, 1965 she married Vernon E. Miles they raised their family in Easton. Mr. Miles died in 2017. Rose served on the women's guild of Saints Peter and Paul Catholic Church in Easton for many years, and volunteered extensively at the school. Rose was a volunteer for many organizations including Troop leader for the Cub Scouts, Boy Scouts, and Den Mother for Girl Scouts. She was the first female to be made a Life Member of the Easton Vol. Fire Co. Station 60, She also served in many capacities with in the fire co. at the time she retired she was ambulance Captain. Other organizations include; Delegate and member of the Maryland State Fireman's Association. Her greatest joy was spending time with her family. Mrs. Miles, is survived by her four children; Vernon E. Miles, Jr. and his wife Melissa of Oxford, David Miles and his husband, Duane Kidwell of Rehoboth Beach, DE, Rebecca Miles of Preston, and Joseph Miles and his wife Mistie of Cocoa, FL; eighteen grandchildren, Rachel Miles, Jimmy Miles, Matthew Miles, Noah Bliss, Hannah Miles, Nicholas Miles, Emilie Miles, Tristian Miles, Jackson Baney, Adrianna Baney, Brady Baney Conor Miles, Michael Greenwood, Wilma Kosakowski, Danny Stormes, C.J. Stormes, Eric Kidwell, Brandon Kidwell and Justin Stormes; Also 23 great-grandchildren, one sister; Maryann Roe of Easton. In addition to her parents, and husband she was preceded in death by a son, Jeffry Miles, two brothers; Tom Swartz and Jack Swartz. A Mass of Christian Burial will be held on Friday, October 1, 2021 at 11:00AM at Saints Peter and Paul Catholic Church in Easton. Interment will follow at New Spring Hill Cemetery in Easton The family will receive friends at the church on Thursday evening from 6:00 to 8:00PM Memorial donations may be made to the Easton Volunteer Fire Dept. 315 Aurora Pak Drive, Easton, MD. 21601. Due to the recent increase in covid cases mask will be required to be worn in the church. Services entrusted to the Framptom Funeral Home - Ostrowski Chapel, St. Michaels, Maryland. Share memories with the family at www.framptom.com

Easton, Rose A. Miles of Easton died at the Washington Adventist rehab Center in Tacoma Park, MD. On Tuesday, September 21, 2021. She was 75. Born in Latrobe, PA. on July 10, 1946 she was the daughter of the late Harry E. and Rose Moffa Swartz.... View Obituary & Service Information

The family of Rose A. Miles created this Life Tributes page to make it easy to share your memories.

Easton, Rose A. Miles of Easton died at the Washington Adventist...