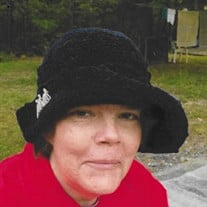 Sally Cockey of Claiborne took flight and flew with the Angels to join her beloved Lord on July 5, 2021, with her sisters by her side. Born at the U.S. Naval Academy in Annapolis MD, August 8 1966, Sally's gentle spirit and love of animals was an inspiration to those around her. Being born into a U.S. Marine family she had the opportunity to travel and live in the Orient at a young age for 2 years and live in several states and travel around the U.S. Early schooling was in Annapolis and the Taipei American School in Taiwan then New Jersey. Upon her father's retirement in 1977 they settled here at the family homestead in Claiborne where Sally continued school in St. Michaels for several years. She later enrolled at The Benedictine School for Exceptional Children in Ridgely where she was able to reach her full potential. She graduated from the Center for Higher Learning, connected to Benedictine and transitioned to the Independent Living program developed by Sister Jeanette Murray OSB. After the sudden death of her father in 1987 she returned home and assisted her Mother in running the household and entertaining many friends and family members who frequently came to visit here in our "Eastern Shore Gods Country". Blessed with a creative and artistic mind she was always busy with crafting in multiple mediums. Intricate hand sewing of doll clothes, drawing and painting, to later building elaborate lifelike setups. She also dabbled in early audio and video home movies. Swimming was a favorite exercise, so much so that she was on the Miles River Yacht Club Swim Team and even competed for The Benedictine Knights at the Special Olympics. Sally's affinity to animals was unique, giving her a special connection and communication, leading to the opportunity to be a part time "Mom" and pet sitter for relatives and friends. Many of which were months long stays with her. Like her older sister Liz, her love of horses had her riding at a young age. As a teenager she started volunteering with the Talbot Special Riders Therapeutic Riding Program now known as Positive Strides Therapeutic Riding Center. Being passionate about this endeavor she continued volunteering off and on for over 30 years. As a child she was a member at the Claiborne United Methodist Church until its closure, and then she started attending Neavitt United Methodist. Sally is survived by her 2 sisters Dorothy Cockey Lloyd and her husband, Barry of Winchester VA and Barbara (Beja) Cockey Marshall and her Life Partner Edward L. Torbert of Claiborne; a nephew Ian Wyatt Lloyd and his wife Melanie of Kuala Lumpur Malaysia; a niece Nalise L. Mullikin and her husband Robert H. Mullikin III of Wittman; a great nephew Robert Henry Mullikin IV; a great niece Louella Kirsten Lloyd and brother in law Neal P. Lednum of Tilghman. She also leaves many close cousins and their families. She was preceded in death by her parents Lt Col John Millis Cockey USMC retired and Jeanne Watson Cockey of Claiborne, and a sister Elizabeth Cockey Lednum of Tilghman. Sally will be laid to rest at a private family grave side service at a later date. In lieu of flowers, memorial donations may be made to Positive Strides Therapeutic Riding Center 6292 Statum Rd Preston MD 21655, or on the web at, positivestridescenter.org or to Talbot Humane 7894 Ocean Gateway, Easton MD 21601. Arrangements are by Frampton Funeral Home - Ostrowski Chapel, St Michaels

Sally Cockey of Claiborne took flight and flew with the Angels to join her beloved Lord on July 5, 2021, with her sisters by her side. Born at the U.S. Naval Academy in Annapolis MD, August 8 1966, Sally's gentle spirit and love of animals... View Obituary & Service Information

The family of Salvadora Adair Cockey created this Life Tributes page to make it easy to share your memories.

Sally Cockey of Claiborne took flight and flew with the Angels...