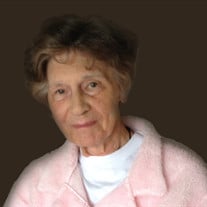 Sarah Elizabeth Orn (Waldis) passed away on September 21, 2018 in Brentwood, California. She was 96 years old. Sarah was born in Federalsburg, Maryland on August 22, 1922. Her parents were Joseph and Minnie Scott Waldis. Sarah graduated from Federalsburg High School in 1941. She married Leonard Orn, an ensign in the US Navy, on April 8, 1944. Leonard was in the Navy and the Air Force for a total of 23 years so they traveled a lot. Pamela was born in Hawthorne, Nevada; Bonnie and Gary were born in Washington DC. They lived in Edinburgh, Scotland for one year. In 1952 they settled in Castro Valley, in the Bay Area of California, where Sarah lived until her death. Sarah and Leonard divorced in 1964. Sarah worked in retail at Capwells and Macy’s for 22 years. She was an expert in mattresses and bedding linens. She was also pretty good at bowling. She played in bowling leagues for several years. She loved going to Fisherman’s Wharf in San Francisco for a Crab Louie and we did that every time we visited. Sarah is survived by her three children, Pamela Ogden (Bryan) of Tacoma, Wa, Bonnie Baxter of Sacramento, Ca, and Gary Orn of Brentwood, Ca. Also, seven grandchildren: David Ogden (Lisa) of Hillsboro, Or, Peter Ogden (Linda) of Sammamish, Wa, Laura Ogden of Squamish BC, Canada, Tony Rodriguez (Yulie) of Folsom, Ca, Julie Williams (Richard) of Castro Valley, Ca, Scott Orn (Vanessa) of San Francisco, Ca, Ryan Orn (Effie) of Sacramento, Ca, and fifteen great grandchildren. Also a sister, Margaret Wheatley of Federalsburg, Md. Sarah was a wonderful woman and a loving mother and we will miss her. A burial service will be held on October 17, 2018 at 1 pm at Hillcrest Cemetery in Federalsburg, Maryland with Pam Bockart officiating. In lieu of flowers, donations can be made to the American Cancer Society.

Sarah Elizabeth Orn (Waldis) passed away on September 21, 2018 in Brentwood, California. She was 96 years old. Sarah was born in Federalsburg, Maryland on August 22, 1922. Her parents were Joseph and Minnie Scott Waldis. Sarah graduated from... View Obituary & Service Information

The family of Sarah Elizabeth Orn created this Life Tributes page to make it easy to share your memories.