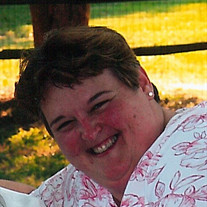 Shari Lee Ostrowski of Bozman went home to be with her Lord at the UMSMC at Easton on Monday, January 7, 2019. She was 58. Born in Bayshore, Long Island on August 3, 1960, she was the daughter of the late Richard T. and Joan Lubbe Van Wyen. Shari grew up in Bayport, and in 1972 her family moved to Ridgley. Shari graduated from North Caroline High School class of 1979. Following her graduation she worked at various jobs. In the early 1990's she became a certified nursing assistant, working for Shore Health Systems at the Memorial Hospital at Easton. Later, she took a position with Dr. Richard Burgoyne at River Family Physicians, where she retired in 2014. Shari also worked tirelessly with her husband, Joseph M. Ostrowski, Sr.; together they owned the Ostrowski Funeral Home in St. Michaels until he retired in 2016. In addition to her beloved husband, Shari is survived by two children; Joseph M. Ostrowski, Jr. (Janna) of Bozman, Sarah A. Sinclair (J.R.) of Easton, two sisters; Lee Sponaugle (Ronnie) of Kent Island, Meryl Geib (Randy) of Ridgely, four grandchildren who called her "Gi Gi", Emilee, Colton, Noah and Lucy, six nephews, Howie Andrew (Stacey), Brian Geib (Heather), Brent Geib (Kristin), Tyler Geib (Danille), Jason Sponaugle (Lacy) and Justin Sponaugle, two nieces, Jessica Sood (Ashi) and Jody Colombo (Jeremy), a sister-in-law, Linda Booze (Luke) of Easton, a brother-in-law, Benjamin Ostrowski (Kathie) of Florida, mother-in-law, Betty Ostrowski of Bozman, many great-nephews, cousins and nieces and mostly, her beloved dogs who were also her children, Minnie, Jewels, Daisey, and Tucker. She was preceded in death by her father-in-law, Benjamin F. Ostrowski, Sr. A visitation will be held on Friday, January 11, 2019 at the Framptom Funeral Home, St. Michaels from 6 to 8:00 p.m. Funeral services will be held at the Bozman United Methodist Church where Shari was a member, on Saturday, January 12, 2019 at 1:00 p.m. with a visitation one hour prior to the service. Burial will follow in the Bozman Methodist Cemetery. Memorial donations in Shari's memory can be made to the ASPCA, P.O. Box 96929, Washington, DC, 20090-6929 or the St. Jude Children's Research Hospital, 501 St. Jude Place, Memphis, TN 38105. To share memories with the family please visit www.framptom.com

Shari Lee Ostrowski of Bozman went home to be with her Lord at the UMSMC at Easton on Monday, January 7, 2019. She was 58. Born in Bayshore, Long Island on August 3, 1960, she was the daughter of the late Richard T. and Joan Lubbe Van Wyen.... View Obituary & Service Information

The family of Shari L Ostrowski created this Life Tributes page to make it easy to share your memories.

Shari Lee Ostrowski of Bozman went home to be with her Lord at...