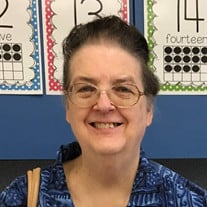 Shelby Jean (Fitzgerald) Schlabach, age 72, of Greenwood, DE, passed away suddenly on October 19, 2020. Shelby was born October, 26, 1947 in Bedford Virginia to Magnus and Mary Fitzgerald. She moved to the Greenwood area in 1966, where she met and married Nathan Lee Schlabach on November, 15 1969. Shelby had many loves in her life including; flowers, birds, sewing, thrift stores, catalog shopping, but most of all she had a heart for children. Not just her own, but at any given time you would find her caring for nieces, nephews, grandchildren and other kids who became her “grandchildren”. For many years she was a member of Greenwood Mennonite Church, where she enjoyed teaching Sunday School and was a behind the scenes encourager to many. She is survived by her loving husband of 50 years, 3 daughters; Valerie and Justin Buschert of Bridgeville, De; Gwen and Juan Cabrera of Greenwood, De; Angela Schlabach of Greenwood, De; a “step-daughter” Stephanie Justice of Milford, De; a brother Jackie Fitzgerald of Harrington, DE and 9 grandchildren. She was preceded in death by her parents, 2 brothers, 2 sisters, an infant brother, and her oldest daughter Stacey Justice. Funeral services will be held on Saturday, October 24, 2020 at 2:00 p.m. at Greenwood Mennonite School. Interment will follow at the Greenwood Mennonite Church Cemetery. A viewing will be held at the school Friday from 6:30-8:30pm and from 1:00-1:45 p.m. prior to the service on Saturday. For those unable to attend, the funeral will be live streamed on the Greenwood Mennonite Church facebook page. In lieu of flowers, the family suggests donations be made to Greenwood Mennonite Church New Building Fund, c/o Roger Swartzentruber, 12987 Mennonite School Road, Greenwood, DE, 19950. To share memories with the family, visit www.framptom.com

Shelby Jean (Fitzgerald) Schlabach, age 72, of Greenwood, DE, passed away suddenly on October 19, 2020. Shelby was born October, 26, 1947 in Bedford Virginia to Magnus and Mary Fitzgerald. She moved to the Greenwood area in 1966, where... View Obituary & Service Information

The family of Shelby Jean Schlabach created this Life Tributes page to make it easy to share your memories.