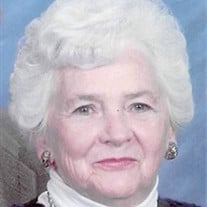 Shirley was born at Easton Memorial Hospital and raised in St. Michaels, Maryland. She graduated from St. Michaels High School in 1949. While in school, she was a cheerleader, sang in the chorus, class secretary and was on the yearbook and newspaper staff. After high school she worked as a secretary. She met Clarence Wooden 'Pat' and they married in 1951. Shirley continued to work until giving birth to her first child, becoming a full-time homemaker devoted to raising her 3 daughters She was very involved with the girls' activities including PTA, Girl Scouts and swim team. She was a lifelong member of St. Luke's United Methodist Church where she sang in the choir, played the hand bells, was in charge of the jewelry sale for the bazaar and a member of the Mary Circle Women's group. Shirley enjoyed gardening, family get-togethers and cooking. She was a second mom to her two sons-in-law Bill and Mike. After Pat retired from the telephone company, the couple traveled, taking cruises and going on many bus trips sponsored by the church. They were original members of the 'Birthday' group which met most months of the year. Shirley is predeceased by her loving husband of almost 70 years, Clarence Edward 'Pat' Wooden, Jr., her parents, Levi D. Roe and Mary O. Shockley Roe, her sisters, Margaret Rude and Laura Delphey. She is survived by her three daughters, Susan W. Skelton (William J. Skelton, III), Easton, MD; Deborah W. Barlow, Bensalem, PA and Patricia W. Johnson (Michael D. Johnson, Millington, MD; five grandchildren, Christopher W. Skelton (Andrea), Patrick W. Skelton (Maggie); Sarah Elizabeth Barlow, Kevin Andrew Barlow and Rachel Marie Barlow; and two great-grandchildren, Parker and Dawson Skelton. She is also survived by her life-long friend of 85 years, Miss Ruth Luebbecke, St. Michaels, MD. A viewing will be held on Monday, June 21, 2021 at the Framptom Funeral Home- Ostrowski Chapel, St. Michaels from 6:00 to 8:00PM. Funeral services will be held Tuesday June 22 ,2021 at St. Lukes United Methodist Church, St. Michaels at 1:00PM. Burial will follow in Olivet Cemetery.

Shirley was born at Easton Memorial Hospital and raised in St. Michaels, Maryland. She graduated from St. Michaels High School in 1949. While in school, she was a cheerleader, sang in the chorus, class secretary and was on the yearbook and newspaper... View Obituary & Service Information

The family of Shirley Roe Wooden created this Life Tributes page to make it easy to share your memories.

Shirley was born at Easton Memorial Hospital and raised in St....