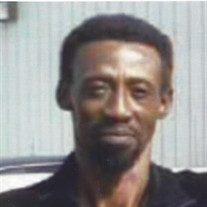 Steven Sylvester Oney was born on January 28, 1957 in Laurel, Delaware and departed this life on Wednesday, June 14, 2017. He was the son of the late Joseph Howard Oney and Emma Jane Deshields-Oney. He was affectionately known as "Stevey" to his family and his dear friends. Steven attended Laurel High School and graduated with the class of 1975. From there he went to serve his country for a brief time in the United States Army and was discharged on May 24, 1978. He had many jobs one of which he worked for 9 years with Mr. Leroy Collins at the Saw Mill, but his most prideful moments was working 11 years with Hitchens Farm tending chickens. He attended St. John's A.M.E. Zion Church near Ross Point, Delaware. He loved his long time faithful friend he called "Lucky" who was his straggly little dog. Steven had a very compassionate heart and a great love for his family and friends. He adored each and every one of his nieces, nephews, and cousins. He had a special bond with his cousin Donald West who became like a big brother to him. Steven "Stevey" is survived by his step-mother, Lizzie Oney, four sisters, Ellen Thompson, Wilma Oney, and Cornelia Oney all of Salisbury, MD, Frances Oney of Georgetown, DE, two step-sisters, Diane Collins of Millsboro, DE, Shelia Collins of Laurel, DE, two step-brothers, David Collins of Georgetown, DE, and John Collins of Laurel, DE. Besides his parents he was preceded in death by a grandmother, Cleona Oney, a brother, Joseph Howard Oney, Jr., two sisters, Sharon Oney and Shaundell Oney, an uncle, Ronald Oney, step-mother, Sylvia Oney, a step-brother, Thurron Hitchens, two nephews, Terrance Tull and Titus Oney. A memorial service will be held on Friday, June 23, 2017 at 11 a.m. with Rev. Ida Ositelu officiating at St. John A.M.E. Zion Church near Laurel, DE. A visitation with the family will be held from 10-11 a.m. on Friday at the church. To share memories with the family please visit www.framptom.com

Steven Sylvester Oney was born on January 28, 1957 in Laurel, Delaware and departed this life on Wednesday, June 14, 2017. He was the son of the late Joseph Howard Oney and Emma Jane Deshields-Oney. He was affectionately known as "Stevey" to... View Obituary & Service Information

The family of Steven S Oney created this Life Tributes page to make it easy to share your memories.