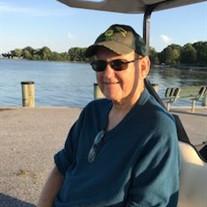 Thomas Gene Blake, Jr. passed away on January 1, 2020, at his home in Neavitt, Maryland. Tom was a loving husband, father, grandfather, brother and uncle. He was a gentle and kind soul with a servant’s heart, whose heavenly welcome was undoubtedly glorious. Born on October 14, 1949, in Easton, MD, Tom’s early childhood was spent here on the Eastern Shore, but at the age of 7, his family moved to Independence, MO, where he would spend most of his life. Tom graduated from Fort Osage High School in Independence, where he played Varsity Football and met the love of his life, Jacqueline (Wallar) Blake. Married for 48 years, Tom and Jacquie raised their children in Independence while Tom was a fire sprinkler fitter and member of UA Local 314. They made lifelong friendships at Cornerstone Church where Tom served as deacon and operated the sound system. His service on the Board of Directors for the Rachel House Pregnancy Resource Center afforded him the opportunity to further serve others in need. They moved to Blue Springs, MO, where Tom continued to be a devoted husband, father and grandfather, and assumed a fatherly role in his grandson Christian’s life. In 2006, Tom brought Jacquie back to the Eastern Shore to make a home in Neavitt, surrounded by fond childhood memories, the water and his family. Tom honored his faith in God by placing service to others at the forefront of his life. He served as President of the UMC Riverview Charge and was on the Board of Trustees for Neavitt UMC. He cared for his aging aunt and uncle, until both of their deaths, while battling his own illness without complaint. Tom was preceded in death by his parents, Lazetta (Ball) Blake and Thomas Blake Sr. Tom is survived by his wife Jacquie Blake of the home; his daughter Jana Blake of Trophy Club, TX; his daughter and son-in-law, Jill (Blake) Morton and Robert Morton of Papillion, NE; two grandsons, Christian Blake and Brody Morton; his brother and sister-in-law, Rodney and Danielle Blake of Trophy Club, TX, and their children Stephanie and Christopher; his brothers-in-law John Wallar of Mayflower, AR, and Stuart (Bud) Wheeler of Huffman, TX; his aunt Anna Lee (Blake) Grisham of Wadesville, Indiana; as well as many nieces, nephews and cousins who he loved so dearly. Visitation will be held on Thursday, January 9, from 6 to 8pm at Framptom Funeral Home, Ostrowski Chapel 312 S. Talbot Street, St. Michaels, MD. A celebration of life service will be held on Friday, January 10, at 1pm at Bozman United Methodist Church, 7988 Bozman Neavitt Road, Bozman, MD, with burial in Neavitt Cemetery. Reception to immediately follow. Arrangements are entrusted to Framptom Funeral Home by the Coales (www.framptom.com)

Thomas Gene Blake, Jr. passed away on January 1, 2020, at his home in Neavitt, Maryland. Tom was a loving husband, father, grandfather, brother and uncle. He was a gentle and kind soul with a servant&#8217;s heart, whose heavenly welcome was... View Obituary & Service Information

The family of Thomas G. Blake, Jr. created this Life Tributes page to make it easy to share your memories.