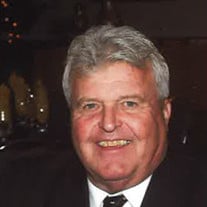 Thomas Edward Cheezum of Preston, Maryland passed away on Tuesday, May 14, 2019 at the University of Maryland Medical System at Easton. He was 73. He was born on October 31, 1945 in Easton, Maryland, the eldest son of the late David Mason Cheezum, Jr. and Eleanor Susan Taylor Cheezum. A lifelong resident of Caroline County, Tom graduated from Colonel Richardson High School in 1963, where he was a member of the school's first football team. After attending Goldey Beacom Business College, he began his farming career in Preston working for Fuchs Farms, Inc. He married the former Mary Lord on June 17, 1972 and they made their home in Preston. A farmer for over fifty years, Tom devoted his lifetime to his family, his farm and his community. He was a member of Bethesda United Methodist Church in Preston for over sixty years, serving on both the Board of Trustees and the Administrative Council. He also belonged to numerous farming and agricultural organizations, including the Caroline County Farm Bureau, the Caroline County Weed Control Board, and the Southern States Board of Directors. In November 1978, he was profiled in a cover story in Farm Journal. He was an avid collector of Lionel trains and antique farming memorabilia, and a devotee of classic films, particularly those featuring John Wayne or Hopalong Cassidy. He also enjoyed spending time with his family, especially his grandchildren. He is survived by his wife, Mary; two sons, Thomas Cheezum II and his wife Christy, and Dr. Eric Cheezum, all of Preston, Maryland; four grandchildren, Thomas Cheezum III, Gillian Cheezum, Susannah Cheezum, and Violet Cheezum; two brothers, David M. Cheezum III and Dan T. Cheezum; and four cousins, Sarah Crowder, Helen Pritchett, Susan Pihl, and Linda Taylor. He was preceded in death by a brother, Albert Lee Cheezum. A funeral service will be held on Wednesday, May 22, 2019 at 11:00 at Bethesda United Methodist Church with the Reverend Linda Pevey officiating. The family will receive friends on Tuesday evening from 6:00 to 8:00 at the Framptom Funeral Home in Federalsburg and one hour prior to the service on Wednesday. Interment will follow at Junior Order Cemetery. Serving as pallbearers will be Gregory Turner, Walter Coulbourne, Thomas Cheezum III, Rex Rosebrock, Dan Cheezum and David Payne. Expressions of sympathy may be made to the Bethesda United Methodist Church, Post Office Box 147, Preston, MD 21655. Share memories with the family at www.framptom.com.

Thomas Edward Cheezum of Preston, Maryland passed away on Tuesday, May 14, 2019 at the University of Maryland Medical System at Easton. He was 73. He was born on October 31, 1945 in Easton, Maryland, the eldest son of the late David Mason... View Obituary & Service Information

The family of Thomas Edward Cheezum created this Life Tributes page to make it easy to share your memories.

Thomas Edward Cheezum of Preston, Maryland passed away on Tuesday,...