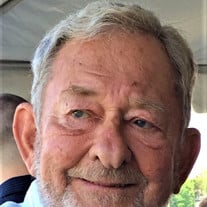 Thomas John Miller, Sr. passed away on Sunday, March 28, 2021 at his home in Rhodesdale, MD. He was 84. He was born on August 4, 1936 in Annapolis, Maryland the son of the late Ernest John Miller, Sr., and Gertrude Grierson Miller. Following his education, Tom enlisted in the United States Navy. After his service on the U.S.S. Antietam he became an active reservist. Following his honorable discharge, he returned home to Annapolis and was the night manager for A&P Store and then started Darden & Miller Foreign Car Repair with his partner. He later moved to the Eastern Shore where he owned and operated Millers Foreign Car in Easton, MD. In 1980 he moved to Eldorado, MD and was a self-employed poultry farmer with his own private airstrip for flying planes. He enjoyed flying his planes, traveling to Florida, and spending time with his family and friends. He is survived by his wife Christa Miller of Rhodesdale, four children, Kimberly Miller-Wells of Annapolis, Kellie Miller-Osbourn (Jeff) of Ownings, Thomas Miller, Jr. of Edgewater, John Miller (Christina) of Glen Burnie, three bonus children, Tasha McMahan (Kevin) of Preston, Sammy Swann, Jr. (Amy) of Rhodesdale, and Robert Choisser of Hardwood, 16 grandchildren and 4 great-grandchildren. He was preceded in death by his parents, his sister Barbara White, brother, Paul Miller, and son-in-law Michael Wells. A funeral service will be held on Friday, April 2, 2021 at 1:00pm at the Framptom Funeral Home in Federalsburg, MD with Henry Grierson officiating. A visitation will be held from 11:00am-1:00pm prior to the start of the service. A private interment will be held at the Eastern Shore Veterans Cemetery in Hurlock, MD. In lieu of flowers, memorial contributions may be made to Coastal Hospice, PO Box 1733, Salisbury, MD 21802, or online at coastalhospice.org/make-a-donation. Services entrusted to the Framptom Funeral Home. Share memories with the family at www.framptom.com.

Thomas John Miller, Sr. passed away on Sunday, March 28, 2021 at his home in Rhodesdale, MD. He was 84. He was born on August 4, 1936 in Annapolis, Maryland the son of the late Ernest John Miller, Sr., and Gertrude Grierson Miller. Following... View Obituary & Service Information

The family of Thomas John Miller, Sr. created this Life Tributes page to make it easy to share your memories.