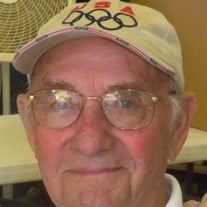 Victor Herbert Martin Rieck of Federalsburg passed away on Saturday, July 3, 2021 at the University of Maryland Shore Medical System at Easton. Born on the family farm in Preston, Maryland on August 8, 1930, he was the son of the late Harry H. Rieck, Sr., and Eleanor Wittmer Rieck. Growing up in Preston, he graduated from Preston High School in 1947. He attended the University of Maryland until June 8, 1951 when he married his high school sweetheart, Vera Williams. He then began farming until 1964 when he re-enrolled at Univ of Maryland and graduated with a bachelors degree in Agricultural Economics. His graduation was attended by his wife and 5 children. He continued his college studies at the University of Arizona where he received a Masters degree in agricultural economics. He then began his teaching career at Miami-Dade Community College in Miami, FL where he became a full professor and was voted professor of the year three times. Upon retirement after a 25 year teaching career he returned home to Preston where he managed the family farm. He was a lifelong active member of Immanuel Lutheran Church where he served in many capacities over the years including being a youth group leader, Sunday school superintendent and being a member of the senior and bell choirs. In his free time, he enjoyed traveling, wood working and watching the Baltimore Orioles. He is survived of his wife of 70 years, Vera WIlliams Rieck of Federalsburg, four children: Victoria Koelling ( Rodney ) of Austin,TX, Valerie Kepke of Okeechobee, FL, Cheryl Peek (David )of Jacksonville, FL, and Vincent Rieck (Debbie) of Charlotte, NC; 11 grandchildren and 9 great grandchildren. He is also survived by his sister Esther Smith of Sebring, FL. In addition to his parents, he was preceded in death by a son, Victor Rieck, Jr. (Marty) and seven siblings. A celebration of Victor's life and Faith in Christ will be held on Saturday, August 7, 2021 at 12:00 at Immanuel Lutheran Church in Preston with the Reverend David Casey-Motley officiating. The family will receive friends from 10:00 to 12:00. Expressions of sympathy may be made to Immanuel Lutheran Church - Stained Glass Window Restoration Fund, Post Office Box 39, Preston, MD 21655. Services entrusted to the Framptom Funeral Home in Federalsburg. Share memories with the family at www.framptom.com

Victor Herbert Martin Rieck of Federalsburg passed away on Saturday, July 3, 2021 at the University of Maryland Shore Medical System at Easton. Born on the family farm in Preston, Maryland on August 8, 1930, he was the son of the late Harry... View Obituary & Service Information

The family of Victor Herbert Martin Rieck created this Life Tributes page to make it easy to share your memories.

Victor Herbert Martin Rieck of Federalsburg passed away on Saturday,...