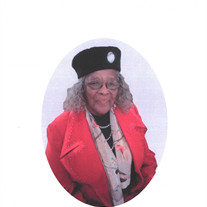 On August 29, 1923, Victoria Jones was born to the late Samuel and Catherine Newcomb of Hurlock, MD. She departed this life on February 23, 2020, at home surrounded by loved ones. She attended Dorchester County School while working at an early age. She loved being with family, playing checkers, bingo, and yard sales. Her favorite color was purple. She attended Solomons AUMP Methodist Church in Williamsburg, MD for most of her life, where she was the mother of the church and held position of communication stewart. She had many occupations. She was employed at the Hurlock Pickle Factory, Tomato Factory, and contracted farm work, as well as house cleaning. Later she went on to marry the love of her life, Amos F. Jones, Sr. on March 27, 1946. They raised 10 children together until his death on June 24, 1971. In addition to the death of her husband, she is preceded in death by two sons Amos Jones Jr., Robert Jones, (mother) Catherine Newcomb, (sisters) Elsie Meekins, Josephine Aldridge, and Flossie Conway, (brother) Oscar Newcomb and several half brothers. She leaves to cherish her memory six daughters, Thelma Butler, Doris Camper (Sherwood), Loretta Thomas (late Charles), Evangeline Jones (late Anthony), all of Hurlock, MD, Martha Price (Herolin) of Hebron, MD, and Valerie Turner (James) of Vienna, MD, two sons, Oliver Jones (late Karen), of Preston, MD, Charles Jones (Audrey) of Dover, DE, as well as James Conaway (Ella), which she raised as her own and one daughter-in-law Bernice Jones of Georgia; and a special friend, Tyrone Murray of Hurlock, MD. 49 grandkids, 143 great-grandkids, 113 great great-grandkids and more than 12 great great great-grandkids, and a host of nieces, nephews, and cousins. A funeral service will be held on Saturday, February 29, 2020, at 12pm at North Dorchester Middle School in Hurlock, MD, with Pastor Tambra Stewart officiating. A visitation will be held from 10am-12pm prior to the start of the service. Interment will be held at Solomon's AUMP Cemetery immediately following the service. Services entrusted to the Framptom Funeral Home. Share memories with the family at www.framptom.com.

On August 29, 1923, Victoria Jones was born to the late Samuel and Catherine Newcomb of Hurlock, MD. She departed this life on February 23, 2020, at home surrounded by loved ones. She attended Dorchester County School while working at an... View Obituary & Service Information

The family of Victoria Jones created this Life Tributes page to make it easy to share your memories.