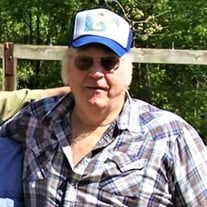 Walter "Perky" Jesse Dunn, Sr. passed away on Thursday, May 28, 2020. He was 77. He was born on June 13, 1942, the son of the late Ferd Dunn and Lula (Boyd) Dunn. He graduated Federalsburg High School with the class of 1961 and then served in the United States Army from 1961-1964. He went on to become a Power House Operator at E.I. DuPont for 37 years. He loved his tractor and enjoyed making people laugh & his family was his world. He is survived by his wife of 56 years, Blanche, his son and daughter-in-law, Walt and Anne of Preston, daughter, Teresa of Greensboro, granddaughter Brandy (Justin) of Pensacola, FL, grandson Billy of Delphos, OH, great grandchildren, Oliver and LeLand Dunn, Athena and Kennedy Gibson, brothers, Dave (Pam) of Delmar, MD, and Howard "Buddy" (Sue) of Preston, MD, and numerous nieces & nephews He was preceded in death by his parents and his brothers, Donald & Fred Services will be private. In lieu of flowers, memorial contributions may be made to the charity of your choice. Services entrusted to the Framptom Funeral Home.

The family of Perky created this Life Tributes page to make it easy to share your memories.