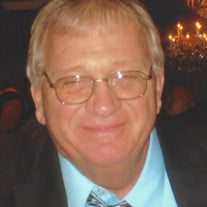 Walter Wayne Lewis died on Monday, January 1, 2018 at Easton. He was born in Dorchester Co. on July 4, 1942 the son of the late James and Belle Walter Lewis. Mr. Lewis grew up in Talbot Co. where he attended Talbot Co. public schools. Following his graduation from Easton High School in 1960 he attended and graduated from High Point College in High Point, N.C. in 1964. Later that year he married Gail Geyer and they made their home in Easton. Mr. Lewis taught math at Easton High School and coached the basketball team and took them to State Finals at the University of Maryland. He also coached basketball at Chesapeake College. Later Mr. Lewis became a partner at the Swann's Tire Center in Easton. Finally, he was an instrumental part with the construction and development of the William Hill Manor where he retired as comptroller in 2008. He was a board member of the Easton Bank & Trust. Wayne was a longtime golfer highlighted by a golf trip to St. Andrews in Scotland where he played several courses. He enjoyed hunting, boating, and spending time with his family. In addition to his wife of fifty-three years, Gail, he is survived by two children; Steven Lewis of Easton, and Jill Slouka (Matthew) of Huntsville, AL, a much loved granddaughter, Hannah Lewis of Maui, Hawaii, two special granddaughters, Sydney and Parker Wilson of Easton, a sister: Jane Keller (Howard) of Oxford, a brother in law, Paul Geyer of Bridgeville, DE and many nieces, nephews and cousins. A memorial service will be held at St. Marks United Methodist Church in Easton on Tuesday, January 9, 2018 at 12:00 noon. Burial will be private at a later date. Memorial donations may be made to St. Marks Building Fund, 100 Peachblossom Road, Easton, MD 21601 or to Talbot Humane Society, P.O. Box 1143, Easton, MD 21601 or to the charity of your choice. Share memories with the family at www.framptom.com

Walter Wayne Lewis died on Monday, January 1, 2018 at Easton. He was born in Dorchester Co. on July 4, 1942 the son of the late James and Belle Walter Lewis. Mr. Lewis grew up in Talbot Co. where he attended Talbot Co. public schools. Following... View Obituary & Service Information

The family of Walter Wayne Lewis created this Life Tributes page to make it easy to share your memories.