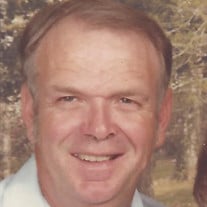 William “Bill” Breeding of Federalsburg passed away on Thursday, June 18, 2020 at Peak Healthcare in Denton, Maryland. He was 83. He was born on October 7, 1936 in Denton, Maryland the son of the late Floyd William Breeding and Anna Mae Short Breeding. Growing up on the family farm, he spent much of his childhood working with family. He later graduated from North Caroline High School with the class of 1954. He was married to Shirley Hitchens on July 20, 1957 and they made their home in Hickman and later moved to Federalsburg. He worked as an industrial parts salesman for 35 years for OA Newton and Son and later for RD Grier for 10 years until his retirement. He was an active member of Seaford Church of the Nazarene for many years. In his free time, Bill enjoyed traveling with his wife, sister, and brother-in-law to Florida and Pennsylvania, watching westerns with John Wayne, playing Rook, and reading his bible. He was also a fan of the Baltimore Ravens and the Orioles. He is survived by his wife Shirley Breeding of Federalsburg, two daughters, Sherry Breeding and Debbie Trice and her husband Mark all of Seaford, five grandchildren: LeAnne, Douglas, Craig, Seth and Michaela; one great grand-daughter, Kendra; and one sister, Delores Lane of Federalsburg and two beloved nieces Lois and Linda of Federalsburg. A funeral will be held on Tuesday, June 23, 2020 at 1:00 at the Framptom Funeral Home in Federalsburg with the Pastor Judy Burnell officiating. Interment will follow in Hill Crest Cemetery. The family will receive friends from 11;00 to 1:00. Expressions of sympathy may be made to the Seaford Church of the Nazarene, 25667 Faith Lane, Seaford, DE 19973 or to the Caroline County EMS,407 University Avenue, Federalsburg, MD 21632.

William &#8220;Bill&#8221; Breeding of Federalsburg passed away on Thursday, June 18, 2020 at Peak Healthcare in Denton, Maryland. He was 83. He was born on October 7, 1936 in Denton, Maryland the son of the late Floyd William Breeding and... View Obituary & Service Information

The family of William Floyd Breeding created this Life Tributes page to make it easy to share your memories.

William “Bill” Breeding of Federalsburg passed away on Thursday,...