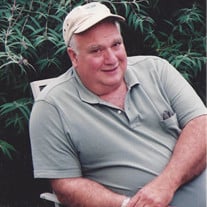 Preston, Maryland William F. "Bill" Kollinger, Jr. died on Monday, April 19, 2021 at home. He was 79 years old. Following his 1959 graduation from Towson High School. Bill worked at a neighborhood service station. In early 1961 while on his way to work, he stopped to assist a lady whose car had a flat tire. The next day, he received a call from the lady's husband asking him to come for a job interview. As a result, Bill was hired by Continental Can Company - a job that lasted just short of 30 years. During his career, he installed and repaired CCC closing machines in various food, beverage, and petroleum production companies primarily on the East Coast, including blueberry packers in Maine, Progresso Foods, fruit packers in the Gettysburg, PA and Winchester, VA areas (Musselman's, Lucky Leaf, Knouse Foods), vegetable packers in North Carolina, local tomato canneries on Delmarva, Byrd Seafood in Crisfield, A-Treat Beverages in Allentown, PA, and the Anheuser Busch brewery in Williamsburg. Bill was the "Have Tools, Will Travel" service guy when closing machines presented problems or required mechanical modifications. Just give him a plane ticket and a rental car and he would be there. Additionally, he serviced customers on the West Coast in Yakima Valley, WA and San Joaquin Valley, CA trouble shooting during time-sensitive seasonal production runs. During the summer of 1990, he had the opportunity to work in Alaska at the salmon processing plants as the salmon migrated east from the Aleutian Islands toward the port of Valdez. This assignment provided the opportunity for many "off the beaten path" experiences including travel from processor to processor by seaplanes and an encounter with a bear passing through a fish camp in the middle of the night. During the mid-to-late 1980s, Bill was also involved with the Chicago CCC R & D division working on the development of the early aseptic packaging machines - the form/fill/seal cups of yogurt, applesauce, and microwavable meals that were being introduced to the market, requiring many trips to the French company of ERCA for the adaptation of their machines to US packaging requirements. Unfortunately, in the fall of 1990, CCC was bought by a competitor, and the job that Bill had loved for almost 30 years was no more. Not one to remain idle, Bill found many odd jobs - carpentry, plumbing, painting, electrical - to do for friends and family. However, in the early 1990s, he decided to obtain his CDL and worked for local trucking companies, Old Dominion and USPS mail hauler EF Thompson / Thornburg, VA until the early 2000s. Bill then began to drive for Cowan Transport, hauling products from the Solo/Dart plant in Federalsburg to various Mid-Atlantic locations until his retirement in 2013. Bill was the father of two children from his first marriage: daughter Sherri Kollinger Breneman (husband Brian) of Mechanicsburg, PA and son Stephen C. Kollinger (wife Karen) of Brunswick, GA. "Pop Bill" considered himself blessed to have six extraordinary grandchildren: Adam Breneman, Tempe, AZ, Grant and Julia Breneman of Mechanicsburg, PA and Nicholas Kollinger (wife Hunter) of Monroe, GA, Lucas and Maria Kollinger of Brunswick, GA, as well as his first great grandchild Malachi Kollinger born two months ago. Pop Bill took every opportunity to attend the sporting events of his grands even if it meant making a 12-hour drive to GA or a 3-hour drive to PA for numerous soccer, football, basketball, baseball and field hockey games over the years. On August 31, 2013 - a stinking hot day less than a week after his discharge from Washington Hospital Center following aneurysm repair - he was determined to attend grandson Adam's first college football game (Penn State v. Syracuse) at Met Life Stadium... which he did... and survived. He exhibited the same determination when he attended grandson Nick's wedding in GA three years ago. In April 1980 he met and in June 2005, he married Millicent Maloney and was supportive of her educational and professional pursuits as well as her community service involvement. Bill was also survived by a sister Kathy Piet (husband Pat) of Columbia and a sister Sharon Kline of Glyndon, nieces and nephews and cousins, also brother-in-law and wife, Oscar and Joan Maloney of Federalsburg. During the last few weeks, Bill became more appreciative of his "local" family on Newton Road, the Taylors - as the recipient of Allison's nursing care, Laura's chocolate chip cookie baking skills and Matthew's compassion making Bill's desire for one last ride around the farm a reality five days before his passing. Bill was interested in all things mechanical and technological such as the development of "green" energy and new innovations in home building and repairs. He frequently watched "Ask this Old House", "Today's Homeowner", any of the shows in the Mike Holmes series, and "Real Green" - and of course, the RFD TV shows involving trains, an interest dating back to his childhood. Bill never met a stranger, and always had a story to share. His sense of humor (although sometimes corny), his "hands on" problem-solving skills, wisdom and insight will be missed by family and friends. The lyrics to the song "My Way" pretty much summarize the way Bill chose to live his life - on his own terms. At his request, there will be no services. Donations in Bill's memory can be made to the Lions Vision Research Foundation, PO Box 1714, Baltimore, MD 21203, or to any charity of your choice. Arrangements are entrusted to the Framptom Funeral Home, Federalsburg, MD. Share memories with the family at www.framptom.com.

The family of William Frederick Kollinger, Jr. created this Life Tributes page to make it easy to share your memories.