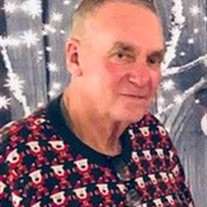 William Edward “Bill Ed” Lyden passed away on Friday, February 9, 2018 at his home in Hurlock. He was 69. He was born on October 20, 1948 in Easton, Maryland the son of the late William Edward Lyden, Sr., and Norma Lee Woodward Lyden McConnell. He grew up in Federalsburg and continued to live in Federalsburg until moving to Hurlock in 2009. He graduated from Colonel Richardson High School after high School, he enlisted in the United States Navy. In the Navy, he learned to be an electrician, a skill he would continue for a life time. During his career in the navy, he was deployed to Vietnam where he learned valuable skills as an electrician repairing electrical systems on Navy river boats. He was honorably discharged in 1971. After returning home he work various jobs in the electrical field following his passion for the electrical trade he developed in the Navy. Following his honorable discharge from the navy, he met his wife Bonnie and they married in 1972. Following his passion for the electrical trade, Bill Ed started Lywood Electric located in Federalsburg in 1976. Bill Ed was always known for his hard work ethic. He would use that work ethic to build his company into what it is today. Most of his customers would always say, Bill Ed would always personally check the work his company was performing. He would do this because he was a perfectionist of his work and he expected anyone performing the work of his trade, something he was so passionate about, to be to his standards. Bill Ed also was a charter member of the Idlewild Ruritans and Federalsburg VFW #5246 where he would regularly attended meeting and was involved in club functions. He was also a member of the American Legion located in Sharptown Md. He is survived by his wife of 45 years, Bonnie Ruf Lyden of Hurlock, one son, Noah Lyden of Bridgeville, and three sisters, Connie Sites and her husband Doug of Seaford, DE, Suzanne Fluharty and her husband Mickey of Federalsburg and Jill Phelps and her husband Jim of Preston and several nieces and nephews. A funeral service will be held on Wednesday, February 14, 2018 at 1:00 at the Framptom Funeral Home in Federalsburg with the Reverend Denzil Cheek officiating. Interment will follow at Bloomery Cemetery near Smithville. The family will receive friends on Tuesday evening at the funeral home from 6:00 to 8:00. Expressions of sympathy may be made to the Federalsburg VFW Post #5246 Auxiliary, 2630 Veterans Drive, Federalsburg, MD 21632 or to the Idlewild Ruritans, P.O. Box 217, Federalsburg, MD 21632 Share memories with the family at www.framptom.com

The family of William Edward Lyden created this Life Tributes page to make it easy to share your memories.