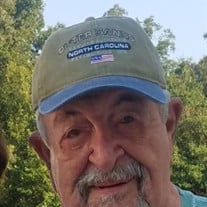 William E. “Bill” Maser of Federalsburg passed away on Thursday, July 4, 2019 at University of Maryland Medical System at Easton. He was 69. He was born on August 24, 1949 in Wilmington, DE, the son of the late Fred Maser and Evelyn Dean Maser. Bill graduated from Seaford High School with the class of 1967. After his graduation, he entered the United States Army and served as a Reservist for four years. His early career started in Laurel at Phillips Men’s Store. Later, he began his life-long career working for Tri Gas & Oil Company as a wholesale salesman. He made many friends from fellow employees and customers over the years. He was a member of Immanuel Lutheran Church in Preston. He was a member of the Idlewild Ruritans for twenty-five years where he served as the Past President and Secretary. He enjoyed spending time with his grandchildren, reading, shooting pool, and playing cards on Thursday nights with his “card buddies”. He is survived by his wife, Doris Schmick Maser of Federalsburg, three children, Cameron Maser of Federalsburg, Kimi Willis and her husband Eric of Federalsburg, and Jennifer Phillips and her husband Doug of Easton, six grandchildren, Kassidy Willis, Colby Willis, Keller Willis, Cullen Willis, Kylee Willis and Veronica Phillips, two sisters, Pat Long and her friend Vic of Trenton, FL, and Ruth Maser of Lucedale, MS. Memorial services will be held on Tuesday, July 9, 2019 at 12:00 Noon at Immanuel Lutheran Church in Preston with the Reverend David Casey-Motley officiating. The family will receive friends from 11:00 to 12:00. Burial will be private. Expressions of sympathy may be in his memory to the Immanuel Lutheran Church, P.O. Box 39, Preston, MD 21655. Services entrusted to the Framptom Funeral Home in Federalsburg. Share memories with the family at www.framptom.com

The family of William E Maser created this Life Tributes page to make it easy to share your memories.

William E. “Bill” Maser of Federalsburg passed away on Thursday,...