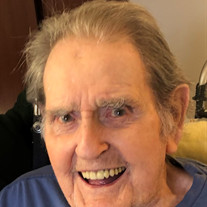 William Ralph Richardson, Jr. of Federalsburg passed away on Wednesday, November 10, 2021 at Bayleigh Chase in Easton, Maryland. He was 100. He was born on May 24, 1921 in Snow Hill, Maryland, the son of the late William Ralph Richardson, Sr. and Vera MacDonald Richardson. He graduated from Federalsburg High School with the class of 1938. After his education, he enlisted in the United States Army serving as a Sergeant at Headquarters Battery, 132nd Field Artillery Battalion 36th Division. His service included battles and campaigns in the invasion of Salerno, Italy and Africa. He was awarded the Good Conduct Metal, American Theatre Ribbon, European, African and Middle Eastern Theatre Ribbon, and the World War II Victory Ribbon. He was married to Betty Kelly Richardson. She preceded him in death on March 10, 1944. He was married to Anita Segars Richardson on April 25, 1954. She preceded him in death on October 24, 2016. He worked for Sunshine Laundry in Federalsburg as a driver. Later he worked for E.I DuPont in Seaford. He later became a certified watchmaker from Horological Institute of America in Washington, DC in 1951. He worked for Henry Devos Jeweler in Cambridge, Maryland and later opened his own shop, William Richardson Jeweler in Federalsburg. He retired on December 31, 1993. He attended the First Church of God In Federalsburg and later attended Atlanta Road Alliance Church in Seaford. After his retirement, he enjoyed a hobby of stained glass specializing in handcrafted and originally designed stained glass crosses, which were presented to family and friends. He also enjoyed traveling the United States and abroad. He is survived by his nieces and nephews: William Robert Richardson of Bridgeville, Gloria Brake and her husband Hamilton of Cambridge, Marsha Kenton and her husband Dale of Preston, Linda Johnson and her husband Loral of Seaford, Faye Layton and her husband Roger of Denton, and Brian Richardson of Federalsburg; and many other nieces, nephews, cousins, caregivers and friends. In addition to his parents, he was preceded in death by two brothers: Robert Marshall Richardson, Jack Richardson and a sister Jean Richardson. A funeral service will be held on Monday, November 15, 2021 at 1:00 at the Framptom Funeral Home in Federalsburg with the Pastor Marie Coulbourne officiating. The family will receive friends from 12:00 to 1:00. Burial will follow at Hill Crest Cemetery in Federalsburg. Expressions of sympathy may be made in his memory to the Federalsburg Vol. Fire Company, Post Office Box 99, Federalsburg, MD 21632 or to Hill Crest Cemetery, Post Office Box 392, Federalsburg, MD 21632 or to Federalsburg Historical Society, Post Office Box 84, Federalsburg, MD 21632 Share memories with the family at www.framptom.com

The family of William Ralph Richardson, Jr. created this Life Tributes page to make it easy to share your memories.

William Ralph Richardson, Jr. of Federalsburg passed away on...