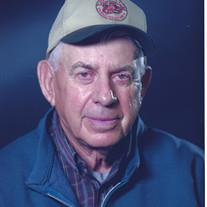 Tilghman - William J. "Willie" Roe of Tilghman died peacefully at Talbot Hospice House on Wednesday March 16, 2022. He was 87 years old. Born on Tilghman Island on July 12, 1934 he was the son of the late William J. Roe Sr. and Margaret Sinclair Roe. He attended Talbot Co. Public Schools in Tilghman and then began a lifelong career as a commercial waterman, working with his father. Throughout his life, Mr. Willie was strong minded and professional. Not only did he work on the water, but also other businesses that were associated with fishing as well. He owned Tidewater Clam Co., in McDaniel and was a partner in the R.D.S. Seafood Co. in Tilghman. In January of 1955, he married Dorothy "Jane" Harrison. They celebrated 64 years of marriage before her passing in October 2019. Mr. Willie enjoyed dancing and singing, spending time with his family, Easter egg hunts, and giving his family tips on life. He loved telling people stories of the old days of Tilghman life, taking his friends fishing, playing cards, and reminiscing. He liked playing checkers with his grandchildren (and he always would win!) and he would always tell them "see you later alligator" and they would reply "after while crocodile". He is survived by his two daughters; Donna Fairbank of Tilghman and Lori Daisey (Terry) of Sherwood. Five grandchildren; Stasia Nelson (James), Justin Daisey (Stacy), Ashley Mister, Hunter Daisey, and Jordin Fairbank. Five great grandchildren; Taylor Nelson, Chanler Daisey, Allie Daisey, Nova Nelson, and Aynslee Daisey. In addition to his wife and parents, he was preceded in death by his son-in-law, Sam Fairbank. A viewing will be held at the Framptom Funeral Home-Ostrowski Chapel on Tuesday evening from 6:00 to 8:00 PM. Funeral services will be held at the Tilghman United Methodist Church on Wednesday March 23, 2022 at 11:00 AM where friends may call from 10:00 until 11:00 AM. Burial will be in the Sherwood Cemetery. Memorial donations may be made to the Tilghman United Methodist Church, 5731 Tilghman Island Rd. Tighman, MD 21671 or to the Tilghman Watermen's Museum, 6071 Tilghman island Rd. Tilghman, MD 21671. To share memories with the family, please visit www.framptom.com

The family of William James Roe, Jr. created this Life Tributes page to make it easy to share your memories.