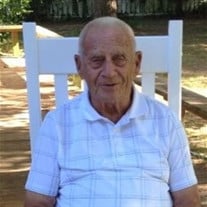 William “Bill” A. Slatcher of Seaford, Delaware went to be with the lord on Thursday, June 27, 2019 at his home in Seaford, Delaware. He was 93. He was born on a farm in Laurel, Delaware on January 10, 1926, the son of the late Augustus Slatcher and Emma Thomas Slatcher. Growing up in Laurel, Bill graduated from Laurel High School. He later served his country in the United States Navy during World War II. After his service, he returned home and worked for DuPont for 9 years. Later he started a life-long career working as an electrician for his own company, Bill’s Electric and CJM Electric. Bill served his community in many ways; he was the Mayor of Seaford for 16 years, served in the Delaware Senate for 4 years, the Lions Club President and District Governor, Involved in National League of Cities and as the President for Small Cities, was active the Seaford Senior Center, Associated Charities, and Chair for the Antique Fire Truck Restoration Committee. He also was a member of St. Johns United Methodist Church in Seaford where he occasionally served as a Lay Minister. He is survived by his wife of 34 years, Dolores Slatcher, a sister, Elizabeth “Betty” Hubble, four children, Jenny Linton, Craig Slatcher and his wife Diane, Maribeth Toumberlin and her husband Ed, and Jan Wishart and her husband Kevin; six grandchildren, Jason Whaley, Ericca Deneumoustier and her husband Mike, Dyllon Slatcher, Connor Slatcher, Andrea Dunn, Ali Shockley and her husband Ryan; eight great grandchildren, Kylla Henry, Frank Henry, Noah Deneumonstier, Lexus Deneumouster, Jaidyn Culver, Kreidyn Culver, Westyn Culver, and Owen Shockley and many nieces and nephews. In addition to his parents, he was preceded in death by his former wife, V. Ruth Starnes, a sister and brother-in-law, Elinor and Claude Huffman, and a brother-in-law, Pete Hubble. Funeral services will be held on Monday, July 1, 2019 at 10:30 a.m. at St. Johns United Methodist Church, 300 North Pine Street in Seaford with the Reverend Richard Evans officiating. The family will receive friends on Sunday June 30 from 5:00p.m. to 7:00p.m. at the church. Burial will follow at St. Johnstown Cemetery in Greenwood. In lieu of flowers, expressions of sympathy may be made in Bill’s name to the Seaford Lions Club, 6863 Atlanta Circle, Seaford, DE 19973 or to St. Johns United Methodist Church, 300 North Pine Street, Seaford, DE 19973. Services entrusted to the Framptom Funeral Home – Fleischauer Chapel in Greenwood.

The family of William A Slatcher created this Life Tributes page to make it easy to share your memories.

William “Bill” A. Slatcher of Seaford, Delaware went to be with...