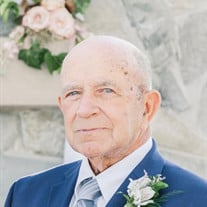 William W. “Bill” Vanderwende passed away on Sunday, September 27, 2020. He was born in Milford, Delaware on August 12, 1933 to the late Everett Lane and Barbara Stutzman Vanderwende. He worked hard and did his best at whatever he attempted. He was a community servant, a dairy and grain farmer, and a dedicated family man and friend. Bill served with many agricultural and community organizations. He was a past Chairman of the Sussex County Conservation District Board of Supervisors, a member and past chair of the Delaware Nutrient Management Commission, a trustee with the Delaware Agricultural Lands Preservation Foundation, a Director and past superintendent of the Dairy Department of the Delaware State Fair, a past Director of the Southern States Co-op, along with many other farm organizations. He was also a member of the Bridgeville Kiwanis Club, served on the Woodbridge School Board from 1975-1985 and served with the Delaware 4-H Foundation. Bill was baptized on January 5, 2020 at Union United Methodist Church in Bridgeville, Delaware. He was a 1951 graduate of Harrington High School. Bill was predeceased in August, 2018 by his high school sweetheart and wife of over 66 years, Ellen Ann Draper Vanderwende. He is survived by three sons, a daughter and their spouses: Daniel William and Becky; Douglas and Debbie; and James and Donna Vanderwende; and Carla and Garry Killmon, all residing within three miles of the home farm. Bill was blessed with ten grandchildren: Breck William (Pam), Jesse (Taylor), Cody Lane (Morgan) and Will Vanderwende, Danna (Shane) Carter, Christy (Scott) Wright, Dusti (John) Small, Amber (John) Campbell, Wendee (Tommy) Bull and Bethany (Ian) Wright. The family kept growing and twelve (with three more on the way) great-grandchildren were blessed to call him Pop- Pop Bill: Alanna, Maci, Brielle, Aydan, Chance, Jack, Aydrian, Draper, Everett, Jeri, Van and Vivi Lou. In addition, he is survived by a sister, Viola Vanderwende Taylor and a brother-in-law, William Simpson. He was preceded in death by a brother, Brice Vanderwende. Many thanks are extended to his wonderful caregivers: Hannah, Betty, Julie, Jules, James and others, who provided loving care during the last year. A visitation will be held on Wednesday, September 30, 2020, 6-8 PM at Union United Methodist Church, 2 North Laws Street, Bridgeville, Delaware. Graveside services will be Thursday, October 1, 2020 at 9:30 am at Hollywood Cemetery, Harrington, DE. A memorial service will follow at 11:30 am at Vanderwende Acres, 22304 Atlanta Road Seaford, Delaware. All safety protocols will be adhered to at all services. In lieu of flowers, memorial contributions can be made in his memory to: Delaware 4-H Foundation, 113 Townsend Hall, 531 South College Avenue, Newark, DE 19716; or Union United Methodist Church, 2 North Laws St., Bridgeville, DE 19933.

William W. &#8220;Bill&#8221; Vanderwende passed away on Sunday, September 27, 2020. He was born in Milford, Delaware on August 12, 1933 to the late Everett Lane and Barbara Stutzman Vanderwende. He worked hard and did his best at whatever he... View Obituary & Service Information

The family of William W Vanderwende created this Life Tributes page to make it easy to share your memories.