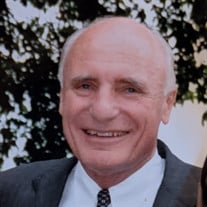 Williams (Bill) Edward Arant, Jr., age 85, died peacefully, surrounded by family, at his home in Easton Maryland, on February 10, 2021. Raised in Manning, South Carolina, Bill started his working life early, at age 10, delivering newspapers across town by bike. He grew up playing baseball, basketball and football – passions he would carry with him through his life, particularly as an avid New York Yankees and Duke Blue Devils fan. His love of jazz was also born in Manning, listening to records with high school friends late into the night, and eventually manifested into a repertoire of jazz standards Bill would sing throughout his life. After graduating from Duke University with a degree in business administration, Bill started his long career in banking which lasted until he retired at age 83. He served in senior executive positions at First Union Bank (Charlotte and Durham, NC), Wachovia Bank & Trust (Winston-Salem, NC) and Hibernia National Bank (New Orleans, LA). In 1980, he moved to Knoxville, TN where he served either as president or executive vice president at Park National Bank, First Tennessee Bank, SunTrust Bank, SmartBank, and Capital Bank. He helped found First National Bank of Knoxville, serving as the bank’s first president and CEO. Along the way, Bill developed a reputation for building meaningful relationships and greeting everyone with an iron handshake. In 2019, Bill retired to the Eastern Shore of Maryland where his wife was raised. With a strong desire to “create value”, Bill loved giving back to his community, doing so mostly by serving on the boards of numerous organizations, including the Knoxville Zoological Park, the Knoxville Jazz Orchestra, United Way, Greater Knoxville Chamber of Commerce, the Knoxville Downtown Association, and the Federal Reserve Bank – Nashville branch. He was a founding member and lifetime director of Leadership Knoxville which honored him in 2019 with its Distinguished Alumni Award. Bill is survived by Barbara Unger Arant, his wife of 60 years who he met at Duke; son Williams Edward Arant III; daughter Jenifer Arant Mudd; son-in-law Shannon Brett Mudd; grandchildren Savannah and Jordan Mudd; sister Yvonne Arant Graham; nephew Winn Graham and his wife Anne; great-nephew Williams Graham (Ashley); great-niece Brooke Graham Ferguson (Mitch); his “angel in a kitty cat suit” Charlie; and a plethora of treasured friends with whom he stayed in close contact over the years. He was predeceased by his father and mother, Williams Edward Arant, Sr. and Evelyn Coskrey Arant. A graveside service for family will be held in Federalsburg, MD. A memorial service will be held later at a date to be determined. In lieu of flowers, please consider a donation in Bill’s honor to the Knoxville Zoological Society (https://www.zooknoxville.org/donate/tribute-giving/), the Knoxville Jazz Orchestra (http://www.knoxjazz.org/donate) or Leadership Knoxville (http://www.leadershipknoxville.com/)

The family of Williams Edward Arant, Jr. created this Life Tributes page to make it easy to share your memories.