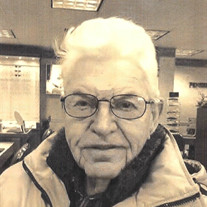 William Franklin Clark (Frank) On Saturday, November 7, 2020, Frank peacefully passed from this life at the Talbot Hospice House at the age of 86. Frank was born January 21, 1934 in Easton to William Wallace and Mary Hammond Clark. He graduated from Easton High School in 1952. He was an avid FFA and 4-H member who raised and showed award-winning sizeable hogs at the state fair. Shortly after graduation he started dating and later married Harriet Palmer Ozman on April 4, 1953 whom he loved for the next 56 years until her passing in 2009. He never stopped loving her right up to Saturday. They had one son Michael Franklin Clark (Wendy) of Easton and one Grandson Michael Charles Franklin Clark also of Easton. He was known by various names; officially named “William” but only strangers called him by his Daddy’s first name. Most knew him as “Frank” an honest, cheerful, industrious gentleman. To his classmates, church members, and kindhearted friend, Patricia Koch, he was “Franklin.” “Uncle Frank” to his beloved nieces and nephews. “The Squash Fairy” to those lucky recipients who found his garden’s bounty on their doorsteps. “Mr. Suburban Propane” or simply “The Gas Man” to those who needed heat in the dead of night. Only one cherished lady called him “Darling” and two devoted Michaels knew him as “Dad” and “Pop.” Frank enlisted in the US Army in 1955 and served with The 3rd Armored Division ("Spearhead") until 1957; he was stationed at Fort Dix, Fort Knox, and Frankfurt, Germany. While on leave, his favorite military pastimes were eating and touring his way through Europe. He enjoyed sight-seeing so much so that while he was adoring the tulips in Holland he missed his boat to return home. He never lived down the joke that when his boat finally came in-he was in the flower patch! A month later than his local Army buddies, he arrived home. He was employed for a short time at Nehi Bottling Company and then spent the rest of his career at Suburban Propane for 44 years. As a farm boy at heart he had a small farm and raised broilers (chickens) for 30 years. He was not much of a “hobby” man, but his biggest passions were his work, garden, and church. Frank was proud man who wholeheartedly loved people. Those he touched will never ever forget him, his generosity, and his loving spirit. He was preceded in death by his father William (Bill), his mother Mary, sister Eleanor Clark Towers, and beloved wife Harriet. Due to restrictions surrounding COVID-19 his family advises that attendees wear masks and practice social distancing. Graveside services will be held on Saturday, November 14, 2020 at 1:00 pm. at the Oxford Cemetery 26570 Oxford Cemetery Rd, Oxford, MD 21654. In lieu of flowers, memorial contributions may be made to Talbot Hospice Foundation 586 Cynwood Drive, Easton, MD 21601, or to First Baptist Church 115 Idlewild Ave, Easton, MD 21601. Services entrusted to the Framptom Funeral Home-Ostrowski Chapel, of St. Michaels. His family understands those who are unable to attend his services and encourages all to share their memories at www.framptom.com

William Franklin Clark (Frank) On Saturday, November 7, 2020, Frank peacefully passed from this life at the Talbot Hospice House at the age of 86. Frank was born January 21, 1934 in Easton to William Wallace and Mary Hammond Clark. He... View Obituary & Service Information

The family of William Franklin Clark created this Life Tributes page to make it easy to share your memories.