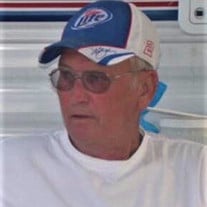 Woodrow Harvey Larrimore, of Preston, Maryland, passed away on Saturday, January 18, 2020, at his home with his children. He was 73. Woodie was born on November 20, 1946 in Greensboro, MD, the son of the late Woodrow Orville Larrimore and Doris Virginia (Pepper) Larrimore. He was a graduate of Colonel Richardson High School Class of 1965. He served in the United States Marine Corp from 1965-1968 and then became a prison guard for the Department of Corrections until he retired in 1987. He was a member of Chestnut Grove Church, VFW Post #5426, American Legion Post 243 and enjoyed hunting, boating, going to Key West, Florida, watching his New Orleans Saints, but most of all he enjoyed spending time with his family and friends. He is survived by his 3 children, Richard Larrimore (Carey) of Preston, MD, Sonja Larrimore Kerns (Tim) of Easton, MD, and Joe Larrimore (Tracy) of Preston, MD, 2 step-sons, Mark Briner of Preston, MD and Matthew Briner (Valerie) of Fallston, MD, 16 grandchildren, one great-grandchild, his sister, Linda Mills, and his brother, John Larrimore both of Hurlock, MD, his best friend of 53 years, Bob Lavariere of Conway, AR, his caretaker and dear friend, Wendy Moran, of Preston, MD, his special friends, Marsha Callis and Nancy Massey and many nieces and nephews. He was preceded in death by his parents and his beloved wife of 29 years, Bernardine Larrimore. Funeral services will be held on Thursday, January 23, 2020, at 10:00am at Framptom Funeral Home in Federalsburg, MD, with Pastor Marie Coulbourne officiating. Visitations will be held on Wednesday from 6-8 pm and Thursday from 9-10am prior to the start of the service. Interment will be held at the Eastern Shore Veteran’s Cemetery immediately following the service. Memorial contributions may be made in his memory to Chestnut Grove United Methodist Church, P.O. Box 74, Federalsburg, MD 21632. Services entrusted to the Framptom Funeral Home. Share memories with the family at www.framptom.com.

Woodrow Harvey Larrimore, of Preston, Maryland, passed away on Saturday, January 18, 2020, at his home with his children. He was 73. Woodie was born on November 20, 1946 in Greensboro, MD, the son of the late Woodrow Orville Larrimore and... View Obituary & Service Information

The family of Woodrow Harvey Larrimore created this Life Tributes page to make it easy to share your memories.

Woodrow Harvey Larrimore, of Preston, Maryland, passed away on...